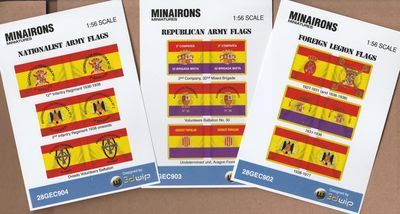 Just as announced some weeks ago, we've just launched three new flag sheets at 1/56 scale --that is, for 28mm gaming. This time we've chosen the Spanish Foreign Legion as well as Republican and Nationalist Armies. As usual, each DIN A7 format sheet comprises up to three historical flags each, slightly textured so as to simulate waving effect. After this triple release, our SCW flags collection at this scale has now expanded up to 4 different sets.

As for the poll where I requested users' opinion on a future flags sheet devoted to the International Brigades, it was run between 20th and 30th January with the participation of 37 users. Ultimate results were as follows: 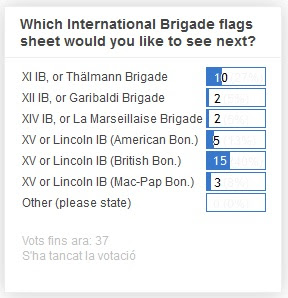 So accordingly to your votes a decision is taken. Our next International Brigades set will be devoted to the 15th IB, British Battalion, followed by the Thälmann 11th IB some time later.

Posted by Soldadets at 4:40 PM