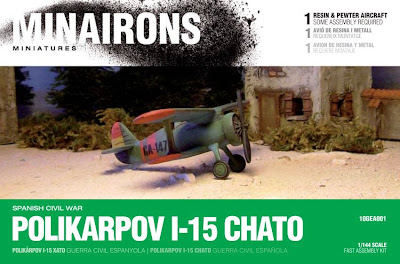 Polikarpov I-15 is the first model of our new 1/144th scale aircraft range. Just as its 1/100th scale counterpart, the kit consists of 3 resin main parts and 5 metal accessories, and comes accompanied by a decals sheet allowing the user to decorate the aircraft either as Soviet or Spanish Republican. 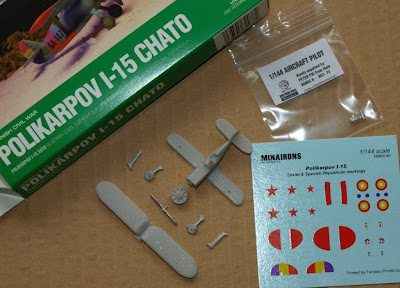 As a novelty with regard to our 1/100 aircraft, the aircraft kit does include a pilot as well, but not made by ourselves this time --but kindly supplied by Peter Pig instead. 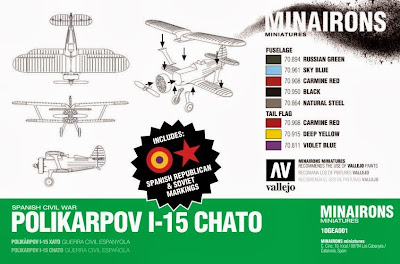 Posted by Soldadets at 4:49 PM No comments:

As maybe a few still recall, some time ago we had started working on the blueprints of an ignote Catalan tank project, that had been developed around 1935 in the same factory later producing the IGC Sadurní tank and carriers. Well, we're happy to show you our ultimate design of this obscure tank, that we've dared to name as Benach M1935 in behalf of its designer. 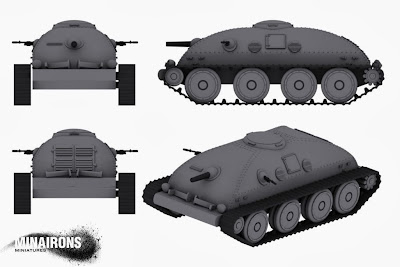 Our ultimate design is not as futuristic, star-wars-like as the first sketches made, but we find it to be quite more consistent according to blueprints. After having abandoned our starting concept of an egg-shaped tank, a number of features look technically feasible and likely now --such as the driver vision port, that in the tank egg version aimed to the right side rather than ahead; the new volumes concevied do allow now a reasonable amount of room left for driver, gunner and side machine gunners to stay together without hindering to each other.

A few features else have been added on our own, such as side hatchets for crew, vision ports at dome or rear hatches/radiator grill at the rear. True that none of them is shown on blueprints, but we've otherwise believed them logical and likely.

The sketches above show the tank running on tracks; we're now preparing some renderings on what would the tank look like once thse are removed.
Posted by Soldadets at 11:50 PM 4 comments:

Flakpanzer I ausf. A 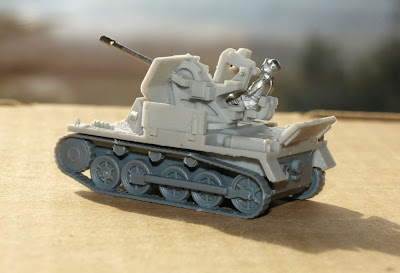 This will be our first set devoted to a period other than SCW. It is the Flakpanzer conversion of Panzer I ausf. A providing mobile AA support to the German columns invading the USSR in Barbarossa. It is already being cast right now at both 1/72 and 1/100 scales altogether, although the 1/72 version will be released slightly earlier. They were scheduled for next May and June respectively, but we are now pretty confident to be able for releasing both before. 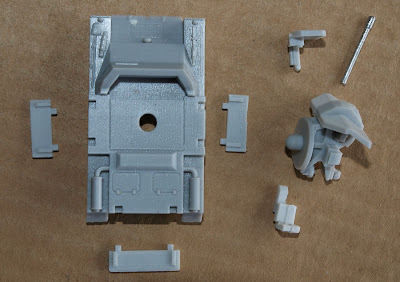 The idea behind is to take advantage of our already made plastic Panzer I ausf. A for transforming it into a Flakpanzer, thanks to a few supplementary parts, mostly cast in resin except for gun barrel which is cast in white metal. The complete kit will then include all the pieces necessary (either plastic, resin and metal), so that what you'll have in box is all this: 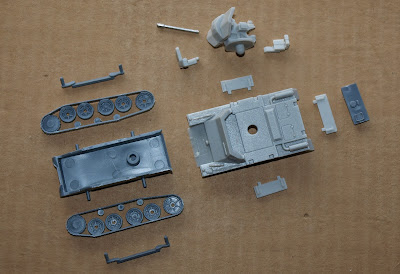 Oh, not to forget that our set will also be complimented by 3 crewmen, that are right now being sculpted at 1/72 by Juan G. Bautista of Xan Miniatures (the artist behind our SCW 20mm figures range, you know). 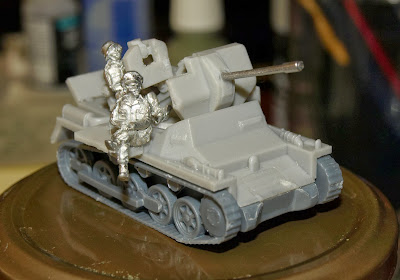 (Please note the figures shown in this picture do NOT actually correspond to this kit, but belong to Xan Miniatures' own catalogue instead; we've been granted permission for using them in this series of pictures, while the ultimate ones in early WWII German uniform are being sculpted)


Same for the 1/100 scale version. I do not have ultimate models of it yet, but this is what the prototype looks like (quite of the same thing actually, but a bit smaller): 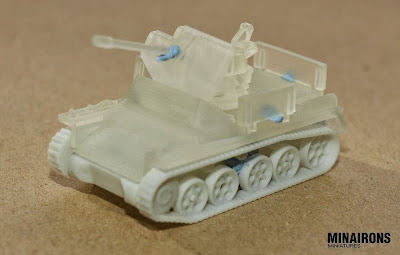 In this case, the complimentary 15mm crewmen figures have been commissioned to another talented sculptor, who deserved to be given a chance in our opinion (besides, this allowed us not to distract Juan Bautista from his current proritary work on both his own brand and our so successful SCW 20mm range). You'll know about him soon.
Posted by Soldadets at 4:21 PM No comments: 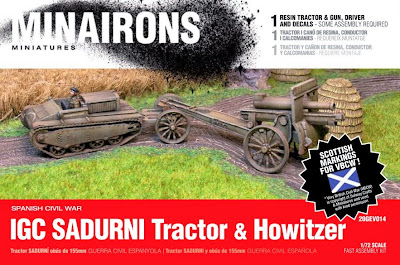 We are proud to show you our latest release at 1/72nd scale: IGC Sadurní Tractor, in our kit towing a Schneider 155mm howitzer. Tractor itself is quite easdy to build, for it consists of a total of 10 parts --4 of which are actually optional, such as mudguards and up to 2 headlights. 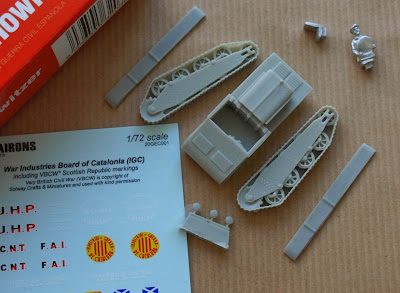 As for the howitzer and its limber, we've been able to solve them in a small number of parts too: just 9. Due to a photographer error (me!), the part destined to hold the muzzle is not shown in picture --this is why you can only see 8 pieces. Apologies for the error, I'm definitely bad at taking photos! 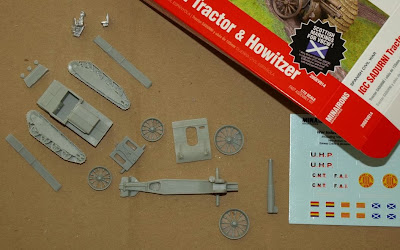 As you can see, kit includes not just tractor and howitzer themselves, but also a white metal driver, a right side empty seat and a decals sheet including both historical and what-if or fictional markings. The whole kit retails at € 16.95.

No time for relaxing here. After having released both Republican Infantry and Republican Command & Weapons sets, we're now going for a similar couple sets of their opponents. So that we've already started discussing and defining our 20mm metal figures SCW range next step --Nationalist Infantry, quite logically. As some of you perhaps already know, our hired sculptor for this range is Juan G. Bautista (whose own figures brand is Xan Miniatures, BTW). Here below you can see the basic concept drawings we've finally agreed:

Just as its Republican counterpart, this new Nationalist Infantry set will comprise a total of 15 figures, representing 13 soldiers and 2 NCOs, all them showing different poses. We judge this number enough for representing a whole Section/Platoon, or at least a balanced part of it depending on the ruleset used; so that users can build an average company by just putting together a few such sets, besides of the related Command & Weapons set to come later.

As you can realize, concept art for the new set reflect a high aggressivity, as expectable in a winner army. All-regulation uniform will also be dominant, although some variations have been forecast (Those small green stars at some figures footing are there precisely meaning such further variation to be introduced)
Posted by Soldadets at 7:19 PM 7 comments:

Our catalogue has just grown with more stuff of Peter Pig. In order to increase our offer related to Spanish Civil War 15mm gaming, now we store Italian troops and equipment from Peter Pig's Range #08, so as to allow building the so-called Corpo Truppe Volontarie (CTV) Italian Army divsions that Mussolini sent in Spain in support of the Nationalist cause.

This includes not only Italian infantry, but artillery and tank crews too, as well as L3/33 tankettes. Besides, up to four different variants of Renault FT-17 tank have also been incorporated into our catalogue on a permanent basis.

In the end, Peter Pig's early WWII German and Russian Anti-tank guns are now stocked too. All these new items from Peter Pig can now be found on Minairons website, so as to allow 15mm SCW aficionados to combine their acquisitions of our own stuff with those of Peter Pig in a single purchase.
Posted by Soldadets at 12:45 PM No comments: 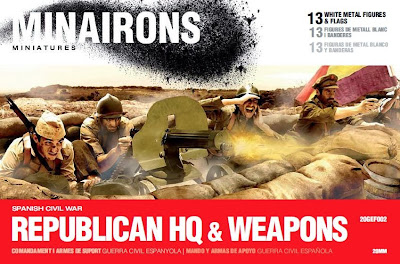 Our second 20mm SCW figures set has today started coming out from factory. A full first batch of Republican Command & Weapons sets will come in our headquarters on next Monday. 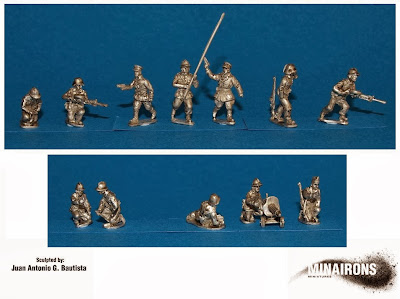 This new set consists of 12 figures, 1 HMG model and a paper sheet with pre-printed, textured Republican Army flags. There are two Degtyarev LMG teams, one CS/Valero light mortar team, the three crewmen of a Maxim HMG, two officers/commissars and a flag bearer.

Here below you have a few captions else: 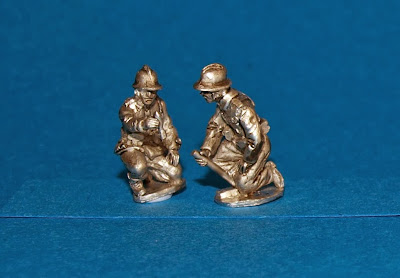 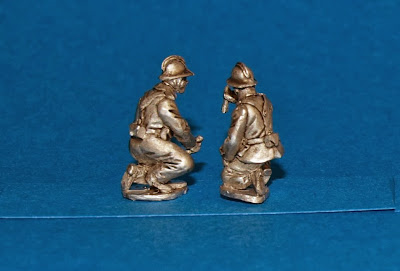 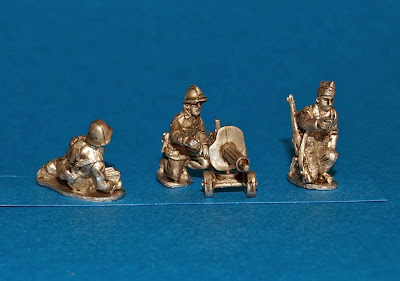 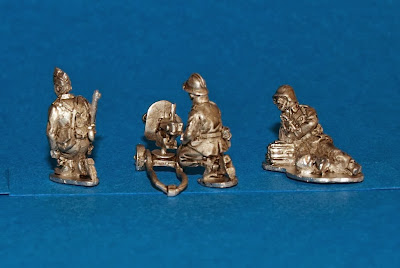 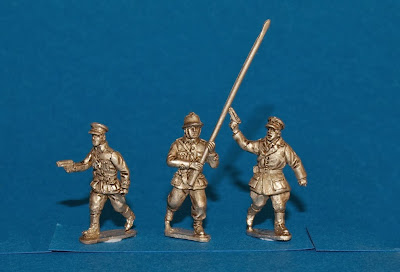 Our 20mm SCW Republican Command & Weapons set can already be ordered right now at Minairons website --although, as said, we won't be able to start delivery until next Monday. It's priced same as the Republican Infantry set --that is, EUR 15.95.
Posted by Soldadets at 6:05 PM 4 comments:

After Hispano Suiza MC-36 AFV and Henschel Type 33 truck, our next release at 1/56 scale is to be this one you can see below: 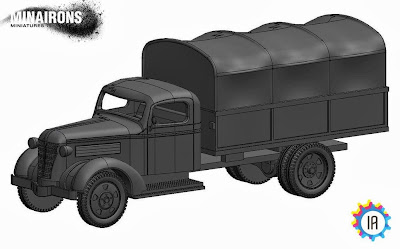 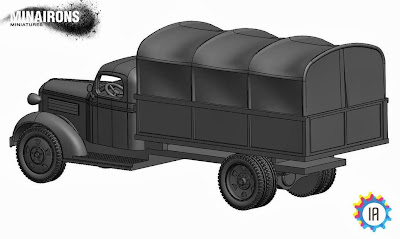 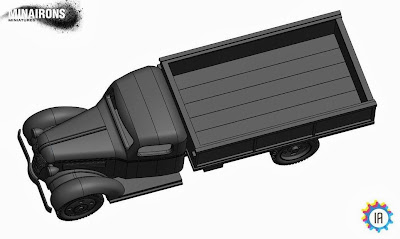 It is 1937 Chevrolet 1.5ton truck, some of which were employed by the Spanish Republic --either built at Barcelona under license, or imported into Catalonia through the French border, some weeks prior to the Republican offensive along Ebro river. Model kit will consist of 16 parts, most of them resin --with a few exceptions to be cast in white metal, due to small size and/or fragility. Designing and 3D printing process has already finished satisfactorily, and we're now starting to work master moulds. We expect it to be born before Saint George's Day.
Posted by Soldadets at 11:39 PM 2 comments: