Just a few words about our 1:600 scale Spanish Galleon, the first one of an announced range of Baroque Era ships: We have kept silent for a long time since our first piece of news at regard --and such persistent silence had a reason why.

Rather unused to ship designing, our 3D designer experienced at first some troubles with the rather organic volumes of a galleon's hull, thus slowing down the project quite dramatically. But now those problems have been sorted out --one learns with practice!!--, so that the basic forms of hull itself are finally close to an end. 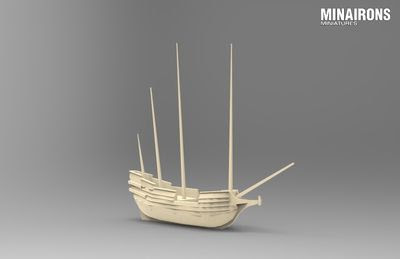 In advance to your possible objections after watching the picture: yes model will be waterline! It only happens that designer found it easier to draw hull entirely (a matter of polygons netting, don't ask me why) and, after 3D-printing the ship, to conveniently cut its hull to waterline. It also has the advantage of having the hull ready designed, to be used as a standard for future projects.

Posted by Soldadets at 6:15 PM