As a second part to the 2016 plans review written some days ago, I'd like now to let you know those other plans regarding 1:72 scale. I must admit these are our most extensive and ambitious plans; and this shouldn't catch anyone by surprise, for it is 1:72 stuff what actually keeps Minairons standing and holding the line. So that we are going to expand our Spanish Civil War range even further in 2016 - this involving both new white metal troop types and high quality resin vehicles.

As for figures, we'll go first for the Foreign Legion - this implying not less than two boxed sets, and quite probably up to three: legionary infantry, command and PaK 36 AT teams. Such will take us the first four to five months of 2016, likely. Once the Legion is done, it will be time to choose between the two best positioned sets behind: either Assault Guards or Requetes - or whatever is adviced by our wishlist status. BTW, I'm saying nothing about Militiamen because this is an upcoming set to be released very soon, still within 2015:

Going now for SCW vehicles, we are working hard to release Trubia-Naval "Euzkadi" tank soon, as already explained in a recent thread, so this will likely be our first AFV release in 2016. Other SCW vehicle projects in portfolio for 2016 are CV-33 Carro Veloce tankette and its Lanciafiamme version, Lancia Ansaldo IZ/IZM armoured car, Fiat-SPA Dovunque 33/35 truck and BT-5 fast tank; except for the truck, all of them are currently at various design stages. I'd also like to take a decision regarding BA-3/6 armoured car - a decision that must compulsorily have into account the excellent model already produced by Pegasus, which is nevertheless little known in Europe. 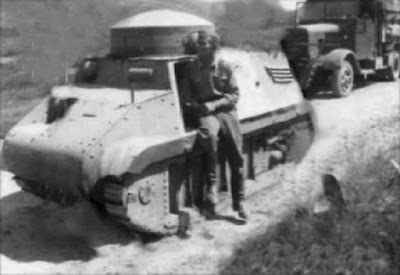 As for other ranges, we shall keep dropping a few WWII and Interwar models amidst, such as a Landesa improvised tank, or a OT-130 flamethrower version of T-26 tank, for instance - but we don't expect these ranges to grow significantly yet, for SCW is to be prioritary still for a long time. One important exception to this rule is our range of 1938 Grand Prix racing cars, that will be expanded further during 2016 with new racers, a ruleset and probably racing circuits too. At present, the British ERA type B car is already being designed at both 1:72 and 1:100 altogether.

A possible new range we are still pondering is related to War of the Spanish Succession - although little can be explained about yet, for it is currently at a very preliminary stage. In any case, it's in our mind to produce some 20mm items complementary to the plastics 1/72 GNW range already launched by Zvezda. Logically, we would then focus on the Peninsular theatre of WSS, making those troop types not covered by Zvezda plastics --such as southern European grenadiers, Spanish and French dragoons, Catalan Mountain Fusiliers, mounted personalities and so. Nothing at regard can be considered as final, though --not even year 2016 as a start.
Posted by Soldadets at 8:04 PM 4 comments:

First of all, let me acknowledge readers that an updated version of our full Catalogue has just been uploaded. It is updated as of today, October 28, and can be obtained by following the link provided in the side bar top box.

Next, I'd like to show you our plans for the 2016 first half --in this article, those regarding 1/100 scale. We are going to release not less than one model per season in that scale, different versions of IGC Sadurní AFV most of them. The one already being produced right now is the tank version you can see below: 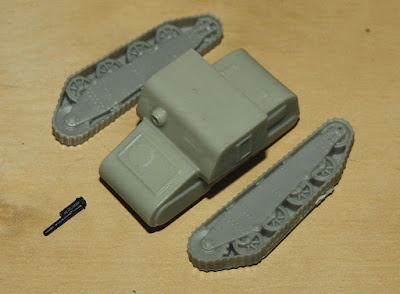 It will be quite an easy to build model, for it will consist of just 3 resin parts and a hard-plastic MG. We have it scheduld for this Winter, and will be followed shortly thereafter by its carrier version, a pretty simple model too. It will be complemented by a 15mm white metal driver and passenger, that are still to be sculpted: 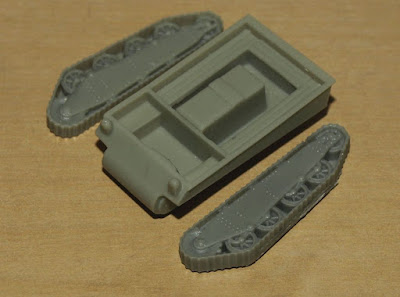 It has been scheduled for Spring, while we expect to release the tractor version in Summer, after having an accompanying howitzer re-scaled, and the above mentioned driver and passenger sculpted. 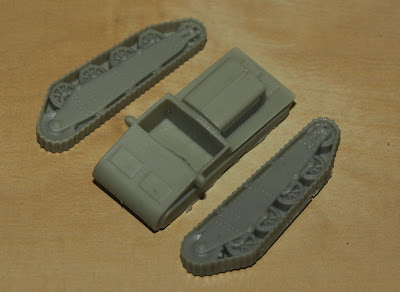 Last but not least regarding this scale, there are strong chances for a fourth model to be launched in the following months: the Japanese Ha-Go type 95 light tank. We are still struggling with its prototype!
Posted by Soldadets at 11:03 PM 2 comments:

We are glad to confirm attendance to the 2015 Barcelona games convention organized by Alpha-ARES club - this year to be held next Saturday, October 24th.

We shall take advantage of such milestone event for launching oficially our next 1/100 scale SCW fighting vehicle: UNL-35 armoured car - which can be already pre-ordered at our website, anyway.
Posted by Soldadets at 11:25 PM No comments:

This weekend I've finally found the time for finishing up a SCW Militiawomen small company I had planned long ago, for my own collection - little after having released them on behalf of Minairons Miniatures, honestly. Please forgive my poor skills at either painting and taking pictures: 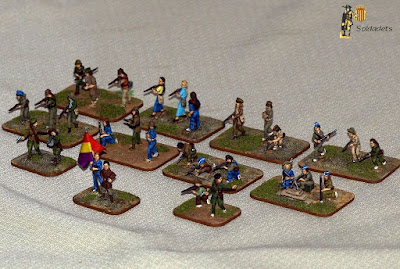 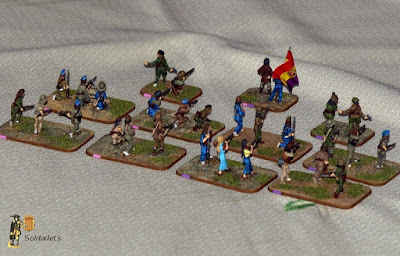 All of the figures there are from Minairons itself, except for two (from Irregular the one, from Barcino the other). Unit has been built for company-scaled settings such as FoW or Blitzkrieg, and conceived as a small size company, consisting of only two understrength platoons, with no further subdivision into squads so as to simulate poorer command-and-control than in Regular Army platoons (see one such regular at my personal painting blog).

As for figures painting, I've used these militiawomen with the aim to test some of the colour schemas in Minairons quick guides, taking advantage of the fact that many girls are dressed in military gear, presumably taken from pre-war stocks - that would also serve for testing the look of a similarly painted Nationalist force. 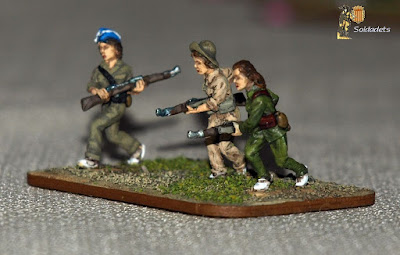 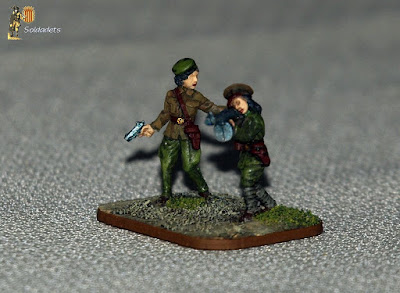 Or, here above, these NCO's uniforms have been given same colour as the above, except for the leftmost one's coat, painted 873 Field Drab as if from Republican stocks. 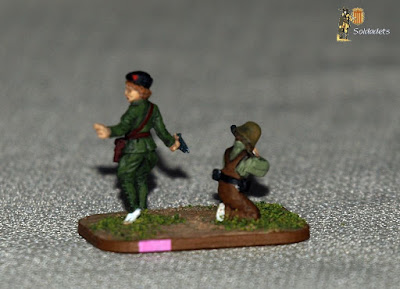 On the other hand, such is the look of the same figure if painted 823 Luftwaffe Camo Green, as if in a brand new uniform. 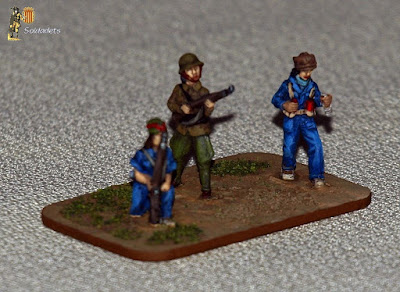 As for girls dressed in overalls, I've chosen not to paint all of them in a single colour, but to alternate blue, sand, earth brown and olive yellow. The selected shade of blue has been Royal Blue, perhaps too bright for some tastes - but I wished my girls to be colourful.

I have posted a number of pictures else at my own painting blog; if curious about any of those pictures, please ask. I'll be happy to answer.
Posted by Soldadets at 11:24 PM 3 comments: 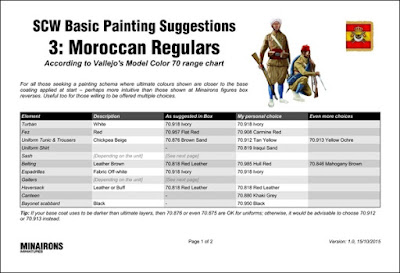 Today we've uploaded our 3rd painting guide, now regarding Moroccan Regulars. It can be downloaded from our www.minairons.eu website as usual.
Posted by Soldadets at 10:37 PM No comments:

This is one project we've been working out quite silently. Now its design has been ultimately approved and sent to 3D-printing in order to obtain its production first masters. Please take a look at it: 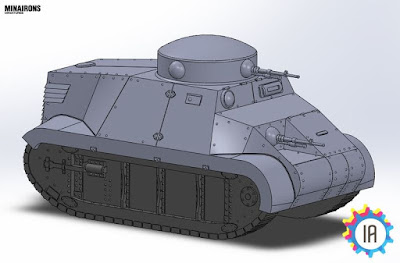 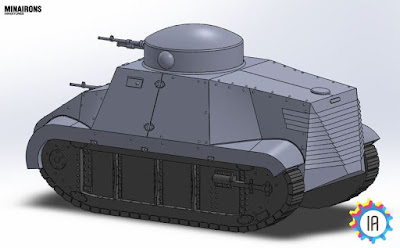 As a funny, added value complement, the ultimate set is going to include most (if not all) of the weaponry combinations the actual tanks showed - starting by the Arellano gun forecast in Trubia factory preliminary designs, as well as several different machine guns the ultimate "Euskadi" tanks carried: Hotchkiss, DT and Lewis. 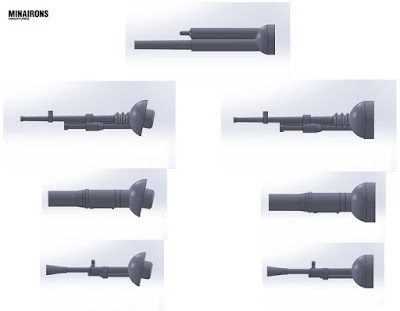 As customary, Trubia-Naval "Euskadi" tank will be produced at 1/72 scale first, and this is going to be our next AFV at this scale. This new tank will see daylight during Winter, most likely. We won't be able to release it before, for Militiamen and Landesa tractor are scheduled first. Besides, we must still wait to have a few prototypes in hand to design decals for it.
Posted by Soldadets at 7:15 PM No comments: