While still waiting for our 1:56 Hispano Suiza armoured car boxes and decals to be printed, perhaps you would like to learn what is in the pipeline next at this scale. In previous posts you've already been acknowledged of what to expect next from Minairons in other scales, but those fond of 28mm gaming have a right to know too what is coming now in their preferred scale.

Well, let me introduce it to you, then. It's the German Henschel type 33 medium truck, used by the SCW Nationalist side: 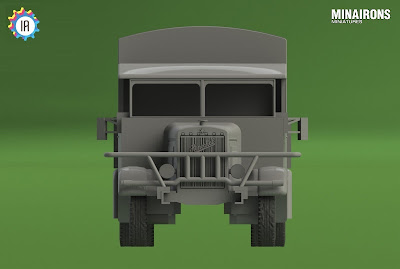 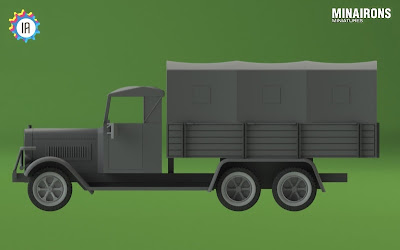 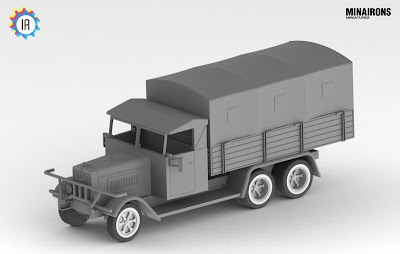 Perhaps worth to explain too that our pipeline forecasts have just been accordingly updated. Please check it here, if curious. Some surprises else to follow soon.
Posted by Soldadets at 7:03 PM 2 comments:

Lately, I've been acknowledging you about our first 1:56 scale model, and have also given you some teasers on what is being currently cooked on the 1:72 scale side. "Great, but what about your promised 1:100 scale models? After the resin Bilbaos and the plastic Panzers, what else should we be waiting for?" --some of you might be silently muttering right now.

Well, as some of you perhaps recall, our most likely candidate for a 1:100 re-scalation in the short term still is the Pz. Befehlswagen I ausf. B command tank --again, a mixed resin + plastic kit, just as its 1:72 scale counterpart... but we're currently working in two projects else at this scale --both in plastic!

Still doubtful about which one will be first, due to a number of both technical and budget reasons. One of the candidates is T-26 tank models A&B of course --re-scaled from an already released 1:72 version--, but the other candidate is that one you can see below: 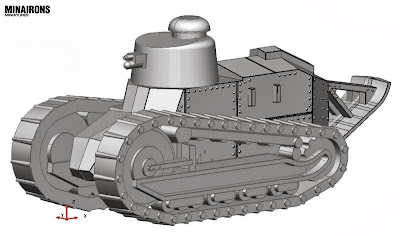 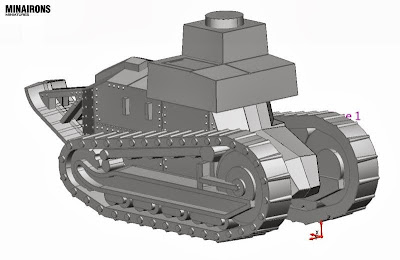 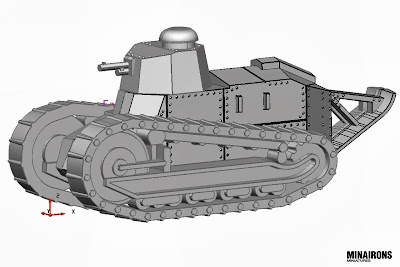 According to our plan, the Renault FT-17 sprue would include not only an optional command version casemate, but both Berliet and Renault turrets too --any of which could be mounted an MG or a gun.

As said on our latest post, the IGC Sadurní d'Anoia tank wasn't approved for mass production, but its concept served for producing two more successful variants: a general purpose carrier and an artillery tractor. Quite logically, both are being designed alongisde with the main tank prototype --and will be brought to production within this year too. Here below you can see all three altogether --the tractor at front, the tank in background and the carrier at right. 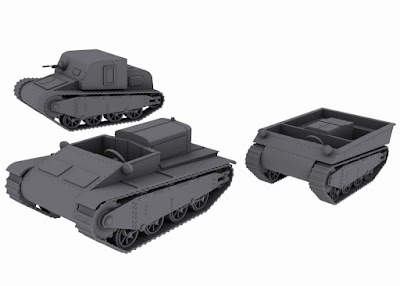 From the very first design stages, we realized there would be too many version-specific parts for one single, multi-option model kit. As a consequence, we've finally decided to release separately each one of them, under the respective references of 20GEV001 (tank), 20GEV013 (carrier) and 20GEV014 (tractor) --all at 1/72 scale first.

It must be noted all three model kits will share the same decals sheet including not only real insignia and mottos historically applied on each vehicle, but also a few hypothetical markings else, aimed at giving an option for alternative, pulp-ish or dystopic settings such as VBCW (*). This is what the sheet will look like --the pink colour you can see is no colour at all, but just the varnish layer area depiction: 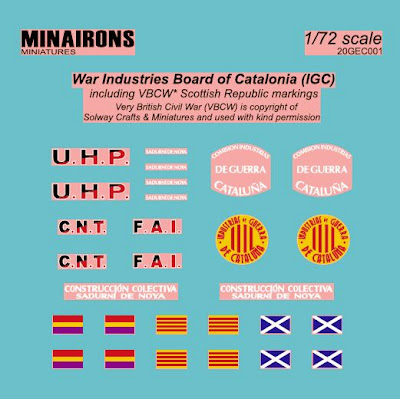 There is more, though. The artillery tractor version will include white metal pilot and co-pilot, as well as a Schneider 155mm gun! On the other hand, the general purpose carrier will include not only the above mentioned crewmen, but also four Republican soldiers as seated passengers!

...and no, the series isn't finished yet.


(*) As many of you already know, Very British Civil War (VBCW) is a trademark owned by Solway Crafts & Miniatures and used with their kind permission.
Posted by Soldadets at 11:20 PM 1 comment: 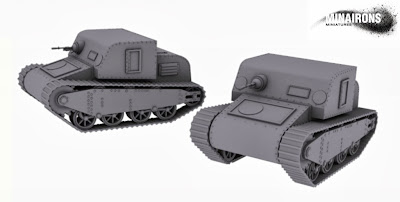 We're excited to present you the next SCW model tank we shall release in 1:72nd scale --pretty soon. It's the IGC Sadurní d'Anoia assault tank, commissioned in late 1936 by the War Industries Board of Catalonia (IGC) to a small factory in Sant Sadurní d'Anoia town, so far well-known by their renowned Benach civilian tractors. The factory --by then held by CNT trade union-- responded to the commission with two prototypes of the turretless tank whose images you can watch here.

Both prototypes were shown to Presidents Azaña and Companys in late January 1937, along with some other original designs. In spite of their excellent mechanical features, prototypes weren't approved for mass production due to poorly armed, as well as (even worse!) not having foreseen a rotating turret capable of sustaining heavier weaponry. However, that first experience proved to be valuable enough for encouraging later the production of an artillery tractor using the Sadurní chassis --naturally, not before the factory was taken off CNT hands by the Republic Government... 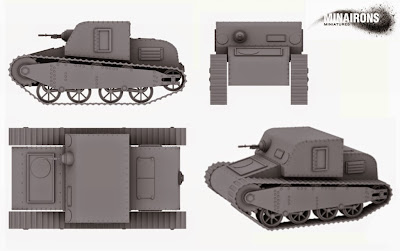 Model itself will be about 5.0cm long and 2.5cm wide, approximately. It will be all resin, except for a hard plastic Hotchkiss machine-gun. IGC Sadurní d'Anoia tank will be sold by the one in a small-sized box, like that of Pz. Befehlswagen I B, and will be of course accompanied by a complete decals sheet including IGC and CNT insignia, as well as generic Catalan, Spanish Republican and VBCW(*) Scottish markings. We expect to have it ready within July.


As many of you already know, Very British Civil War (VBCW) is a trademark owned by Solway Crafts & Miniatures and used with their kind permission.
Posted by Soldadets at 11:45 PM 2 comments: 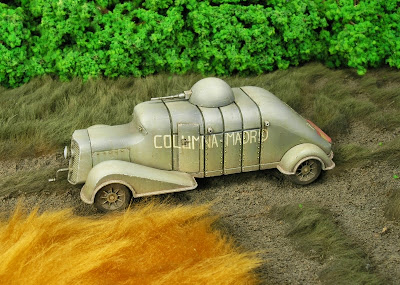 A first batch of forty (40) resin Hispano Suiza MC-36 Armoured Trucks at 1:56th scale is to come out of caster's workbench this week.

Not just pretty soon, but a little too soon in fact –for unfortunately we haven't expectations for their packaging box or accompanying decals to be ready in time for the event. This is why we've decided to put that early 40-models batch on a special pre-release offering while awaiting those boxes and decals can finally be printed –for a next batch at least... 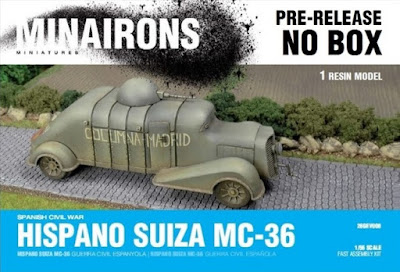 Any of you who might be interested on this stylish, somewhat pulp-ish Spanish Civil War AFV, but wouldn't mind having to do without such boxes and decals, you can now pre-order your Hispano Suiza for just EUR 21.95 –instead of the EUR 24.95 it will retail later!

Model itself consists of 17 parts –two of which, an optional T-26 turret along with a separate hatchet. Also, set includes two different windshield options --either open or closed.

For pre-ordering your Hispano Suiza, please go to our www.minairons.eu website.

Please remember, EUR 21.95 for a limited period of time –until the supplementary components above are finished up, or all the starting forty (40) models are sold out! 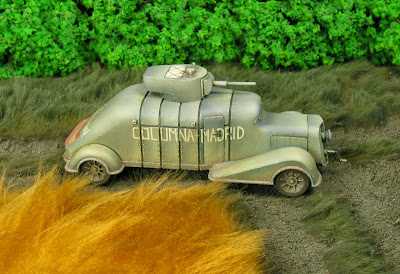 Posted by Soldadets at 10:25 PM No comments:

We at Minairons Miniatures are happy to publicly announce to be carrying Vallejo Acrylics' Model Color acrylic paints range, from now on. Our catalogue is currently including all their 80 colours under the Military Range label, besides of matt varnish, thinner and decals fixers.

The idea behind is no other than helping you optimize your eventual purchases shipping costs, when buying our own model kits --or those we're also carrying along, such as those of S-Models, Plastic Soldier Company or Zvezda. And by this offering you an ever wider hobby choices.

Don't miss the chance, get supplied with Vallejo paints when purchasing our model kits!
Posted by Soldadets at 10:57 PM No comments:

Some eye candy, thanks to the excellent work of Rubén of Heresy Brush: 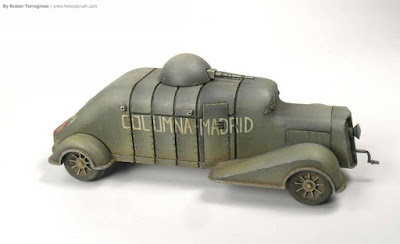 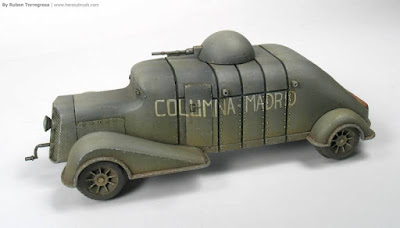 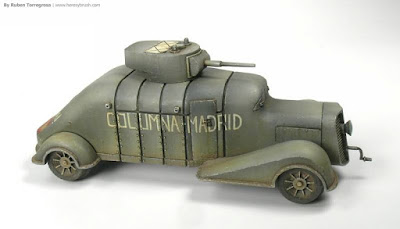 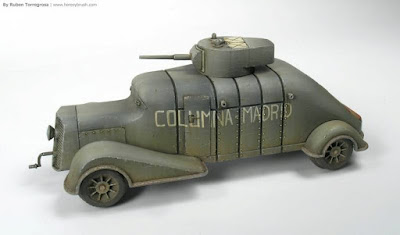 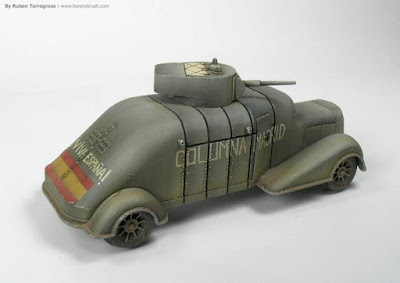 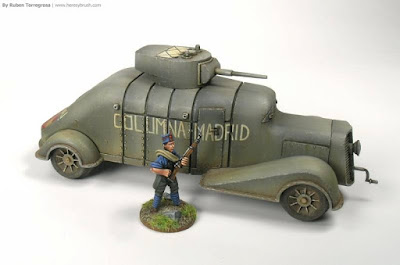 We are delighted to acknowledge you all that a first batch of around 50 units of this superb 1:56th scale model is already on the way. They're being cast in the finest resin in market --an actually flexible, easy to work one. You won't be deceived by it! 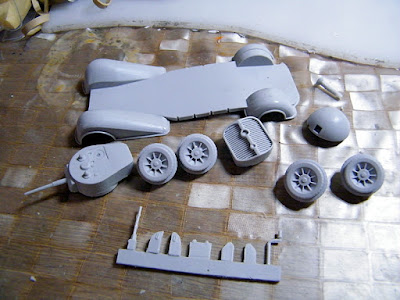 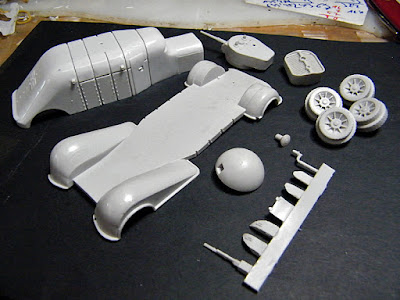 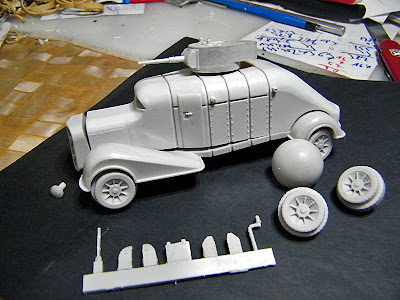 While this first batch is being cast, now it's time for boxart designing and printing. It all should be finished up in a few weeks --certainly within this June.

Now, some good news for 1:72nd scale fans too --for this huge, stylish beast is already being re-sized into your favourite scale!
Posted by Soldadets at 12:01 AM 2 comments: