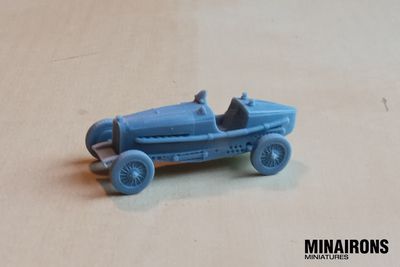 I'm glad to share our latest 1:100 scale Grand Prix racer release - that of the iconic Bugatti type 59 French racing car. This is our first DLP 3D-printed model in this range, so it's produced in one single piece - no assembly required, then. It can be already purchased from Minairons miniatures website.

Here below you have a painted sample from my own collection (not my best photo taking job, admittedly):

Its 1:72 scale version is nearly ready, too. Release is scheduled for within this month of July.

Posted by Soldadets at 11:26 AM No comments: 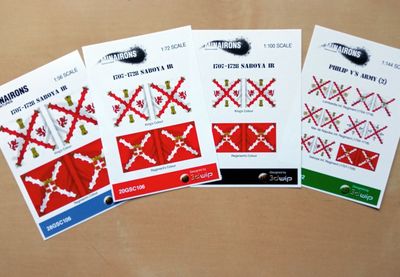 Our War of Spanish Succession infantry flag set ranges keep expanding at a steady pace - at all scales altogether. This time, we've added to collection the flags of a further Two Crowns' Spanish unit: Savoy I.R., another senior regiment in the Spanish Army of that time.

Along with the individual Savoy I.R. sheets in 1:100th, 1:72nd and 1:56th that you can see in the photo above, we've also released a 3-unit flag sheet in 1:144th scale too, that contains the colours of Lombardy, Seas of Naples and Savoy Infantry Regiments. 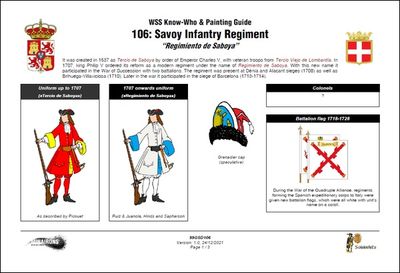 Along with the flags, I've also released a PDF guide on the subject for free download, as usual.

Posted by Soldadets at 10:51 AM No comments: 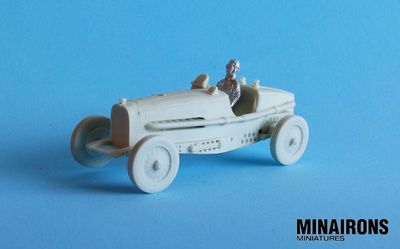 I'm happy to share with you the ultimate production model of our sixth Grand Prix vintage racer at 1:72nd scale - the famous Bugatti type 59, whose releasing is scheduled for this very month of June. It consists of just 5 parts (hull and wheels, all them resin cast), besides of a white metal driver. 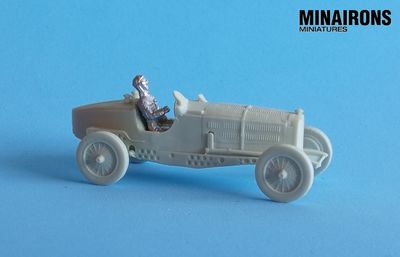 Its 1:100th scale version is due for release soon, too - next month as late!

Posted by Soldadets at 10:47 PM No comments:

As an average, 3D prining machines still require a good deal of maintenance and skills - at such extent that some say that 3D printing is a hobby in itself; so perhaps not everyone everywhere is ready to have a 3D printer at home yet.

However, the fact is that every day there are more and more digital designers of 3D models and figures for printing - and many of these are noticeably improving their excellence. Their models are usually designed to be printed out ready to paint, with very little assembly if any - a big advantage over conventional multi-part models, admittedly.

This is not a passing fashion, but a consolidating trend. 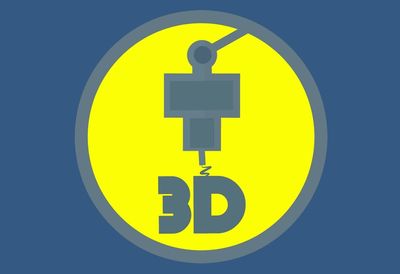 What are we meaning?

Rather than competing the trend with conventional multi-part products, we've thought it best to join forces with a few such innovators through Patreon, to help some of our ranges grow with their creations while supporting their job.

One of the designers we’ve selected is Plane Printer, who's creating 20th century aircraft models compatible with BRS (so pre-designed to 1:200th scale). From now on, we’ll be re-sizing his products into 1:144th scale and ready printing them, within our own SCW aircraft range. Besides of the ultimate 1:144 model itself, our website will also show a direct link to Plane Printer’s own product page on Patreon, for if someone wants to have it printed by him(her)self. 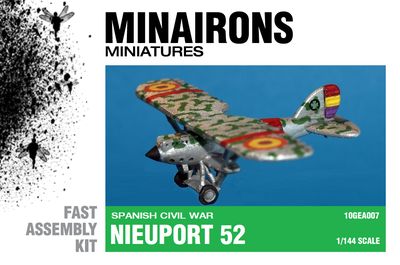 The model we've chosen as a start is Nieuport 52 fighter, a pretty ubiquitous early war aircraft. It is sold in box as a one piece DLP 3D-printed model, retailing at €8.22 (+VAT where applying) so cheaper than our multi-part resin & metal models. 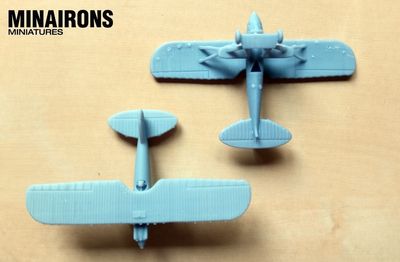 Time will tell if we got the diagnosis right, so as to even go deeper into the experience with new WWII and Interwar aircraft models – or if otherwise it was the mistake of my life! As an old Catalan saying says, qui no arrisca, no pisca ("who dares not, does not fish"). 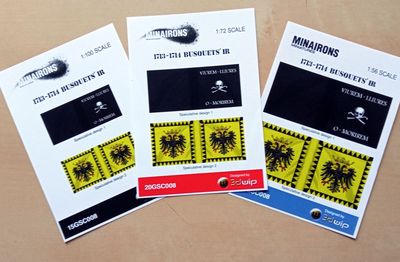 I'm happy to announce release of a further set of War of Spanish Succession infantry flags at 1:100th, 1:72nd and 1:56th scales altogether. The set we've launched today comprises two flags attributed to an Austro-catalan regiment, that of Col. F. Busquets aka Mitjans. Worth to be said that much of what is known about this particular regiment belongs to educated speculation, based more on local folk-lore than on factual data. Scholars have even pointed toward a third alternative flag - the St. George Cross one, like that of General Deputation I.R. (GSC001). 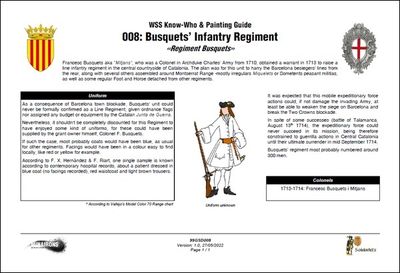 Just as usual, we've published a PDF guide on the subject for free download, gathering all the scarce information on this regiment currently known.

Posted by Soldadets at 6:20 PM No comments: 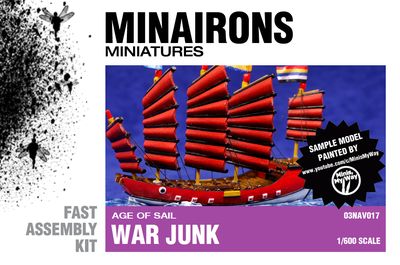 I'm pleased to share our latest 1:600 scale Age of Sail ship model release - today, a Chinese warship from Ming and Qing dynasties period, modeled after a Fú Chuán type warship (福船). Such kind of large vessels served as escorts in the famous Zheng He's Treasury Fleet expeditions around the Indian Ocean and beyond. 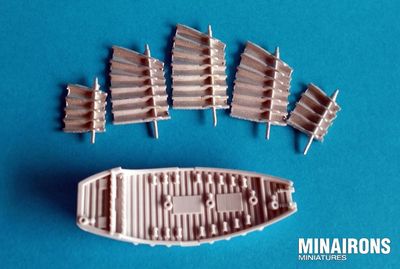 Model itself consists of a high quality resin hull as well as five white metal parts for masts and sails. Kit also includes by default a set of Qing Chinese ensigns and flags. 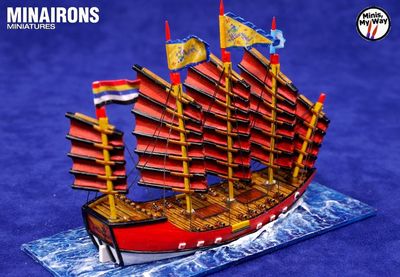 Posted by Soldadets at 5:50 PM No comments: 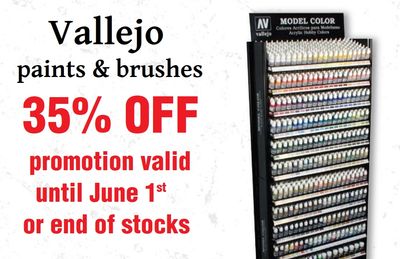 From today May 21st to the 31st, all Vallejo products we're currently stocking will be 35% off!

Promotion applies both to Model Color paints and Toray synthetic brushes range, until the end of month or stocks are over.

Don't miss the chance to get re-supplied now at Minairons website!

Posted by Soldadets at 5:13 PM No comments: 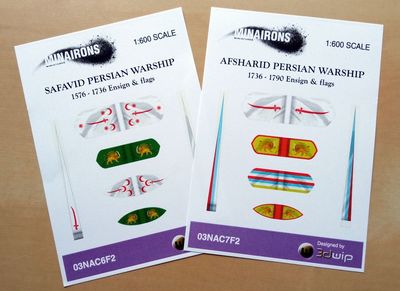 We've devoted this week's releases to the Persian Navy in the Age of Sail, with two new flag sets comprising ensigns and minor flags from both Safavid and Afsharid dynasties (late 16th to late 18th centuries). Worth to be remarked that the white background ensigns are fully interchangeable from one period to the other, because a white flag with a red sabre was the traditional Persian war ensign. Otherwise, coloured flags are own and exclusive of each dynasty (green for Safavids, yellow and striped for Afsharids). 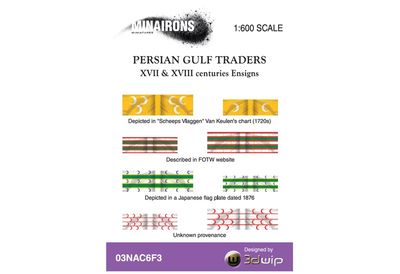 It was also scheduled a third release, devoted to Persian Gulf trader flags in the Age of Sail - as you can see above. However, a small latest hour issue has prevented us from releasing this set alongside with the other two. Anyway, as such issue is to be solved within a few days, we have chosen to make it available too - under pre-order status.

All three sets can be already acquired from our www.minairons.eu website.

Posted by Soldadets at 10:43 PM No comments: