I'm most relieved and happy to let you know that our www.minairons.eu website has just been fully restored at last, with all its main features properly working.

Most important, these good news also include our PayPal payment module, that had ceased to work two weeks ago --due to have become outdated and no longer supported. Such module has been adequately updated folollowing PayPal's own directions, so that it works fine again.

Apologies to all those having had issues during those stressing two weeks!
Posted by Soldadets at 6:52 PM No comments:

We've already started working on a new set of Spanish Civil War 20mm figures. It's now time for one of the Nationalist side's most feared shock troops: the native Moroccan troops known as Regulares. Here below you can watch some sketches of the first one of two forecast sets devoted to this colonial corps:

As usual, this first set will comprise 13 askari riflemen and 2 NCOs --mostly dressed in a between seasons uniform, with varying headgear. All 15 figures will show a different, unique posture.

Sculpting work of this new set started some days ago and is progressing at a fast pace, so it allows us to expect having them ready quite soon.
Posted by Soldadets at 11:08 AM 3 comments:

Some of you perhaps have already noticed that our www.minairons.eu website is currently out of order.

Our maintenance team is hurriedly working to solve this. It's still uncertain whether they'll be able to sort the issue out in a matter of hours, or days instead. Please accept my most sincere apologies for this temporary inconvenience.

All our e-mail addresses are working and fully functional, however. If you are in the need to get in touch with us, whatever the reason for, keep confident that we'll be promptly responding to you. Apologies again.
Posted by Soldadets at 12:14 PM No comments: 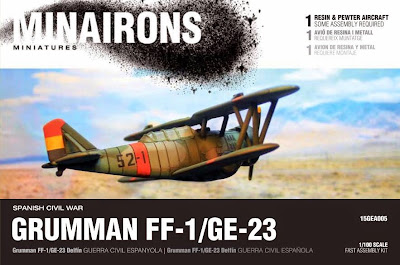 We're proud to announce the release of our first model kit of 2015: Grumman FF-1/GE-23 fighter at 1/100 scale, the first aircraft carrier based fighter, a few dozens of which were acquired by the Spanish Republic during SCW. 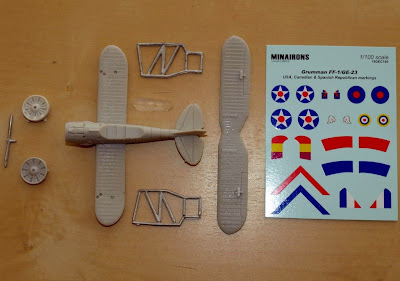 Model kit itself is well detailed albeit quite simple, as you can see in the image above. All main parts are made of high quality resin, while struts and propeller are white metal. As a novelty with regard to previous releases, this kit includes a translucent resin cockpit. 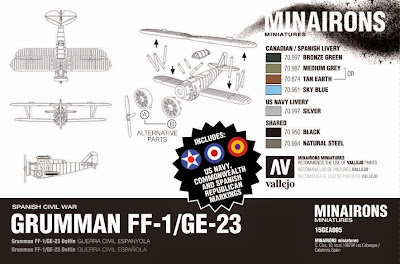 As with formerly released aircraft, our 1/100 Grumman FF-1/GE-23 fighter has been released in a box whose reverse includes an assembly schema and a painting suggestion. Kit also includes a decals sheet with markings for US, Commonwealth and Spanish Republican service. it's been priced at € 15.95, just as the rest of our 1/100 aircraft range. 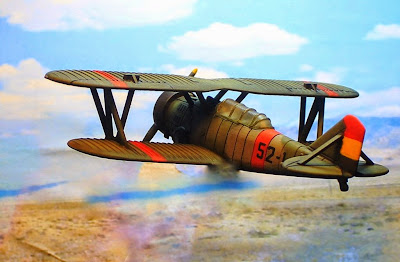 Posted by Soldadets at 8:01 PM No comments: