After a lapse of frantic activity time either re-vamping the miniature ranges of his own, or launching a new WWII 1:72 models and accessories company christened as Steel 72, our sculptor Xan has finally met the time for sculpting a new set of Spanish Civil War figures for Minairons. Such new set is devoted to Requete militias and will consist of 18 figures, comprehensive of NCOs and officers, an LMG team, flag bearer and christophore. Here below you have his preliminary sketches on it: 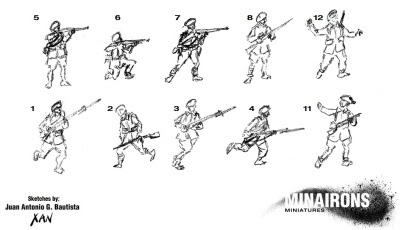 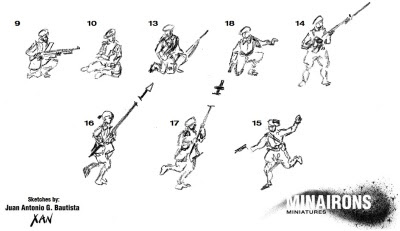 It's soon still to give an ultimate deadline for them. It depends not just on sculptor's own speed at making the greens, but also on other factors to be kept in mind: boxart progression, packaging design and printing... However, my overall feeling is that we'll be able to release them reasonably soon.

Looking forward to getting a few boxes of thses. Nice to see your range expanding.
Simon r.