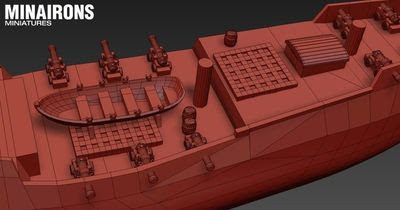 Well, I admit there isn't much to show yet, because 3D designing of our announced 1:600 Galleon has revealed to be a little harder than expected at start. However, when designer showed me a few captions on his work progress, a few days ago, I couldn't resist the temptation to post them on blog. Ship's hull, a part of which you can see above, will measure around 70 mm long --Manila galleons were really big!-- and perhaps around 17 mm wide.

As you can see by the picture above, we're taking a lot of care about detail --even at the risk of having to reduce it later!--. Only after having 3D-printed a first prototype, we'll be able to determine parts and materials, although I'm currently considering as most likely to finally make hull in resin, with masts and rigging in white metal.

Unless something gets really wrong, ship will be released as a boxed set including a DIN A7 format paper sheet comprising not only its main ensign, but minor flags and jack as well. Here below you have a draft of such flags sheet: 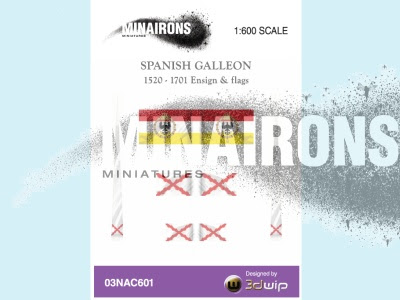 Posted by Soldadets at 7:30 PM

By the way. There is another company planning to go into 1/600 XVI century wargaming ships. With a different approach.