Just as promised last month, we've just made available three new sets of 1:100 scale flags for SCW 15mm gaming. This time it's been the turn for the Republican militia Fifth Regiment, Nationalist Cavalry and Basque Army. 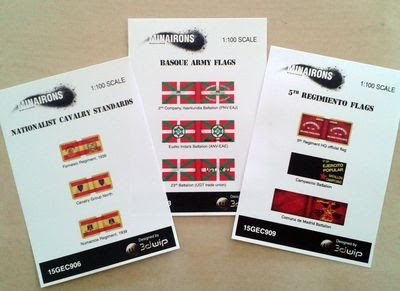 New sets come, as usual, under form of small DIN A7 paper sheets with three historical flag designs each, slightly textured so as to simulate fabric waving under wind effect. Thanks to these new additions, our range of flags at this scale now comprises 11 different sets --and will keep growing all 2017 long, for the most immediate releases we've forecast in 1:100 scale are Falange militia, Catalan Army and Moroccan Regulares. We expect to release these before Christmas.

Regarding our equivalent range of 1:72 scale flags there will be further news soon, too --in one or two weeks' time as late.