Pz. Befehlswagen I B, in production 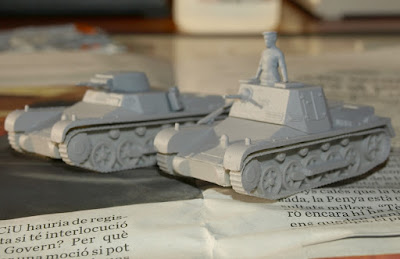 Good news for our 1:72nd scale fans: the Pz. Befehlswagen I B command tank is about to be released, as a mixed resin + plastic kit as promised, and a first batch of them is currently being cast.

Model will consist of 4 resin main parts (hull, crew superstructure and both sides' wheel/tracks sets), as well as an optional upper dome allowing you to build the command panzer as it was used in Spain, or in the later WWII version; and upper hatchets (both open and closed) that can be fitted into either of those two sub-versions. besides, the kit will be completed with two plastic parts intended for optionally building the model as a regular fighting Panzer I ausf. B. 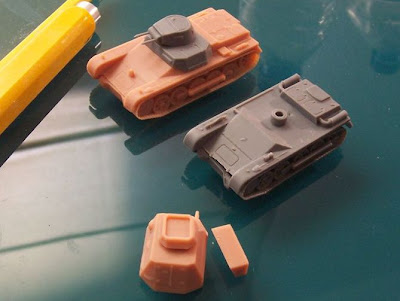 Except for the unprimed models picture above, the other captions shown correspond to the very first models already cast, some of which have been delivered to me for ultimate approval, while some other are in hands of Heresy Brush for some artwork. Naturally, I wouldn't be missing the chance to build and paint these by myself! 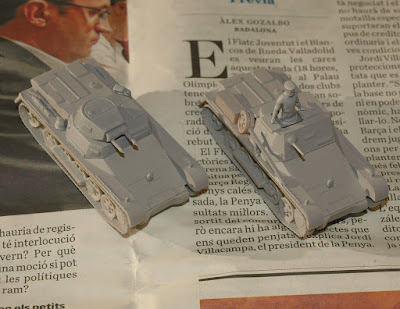 Please note that the stowage items that can be seen on mudguards (spare wheel, toolbox, helmet and rifle) are not included in the kit itself, but come from my own spares box. As for the crewman, it is just a crude prototype of that one to be ultimately included in our plastic T-26 sprue.
Posted by Soldadets at 12:04 AM

Any chance of the Befehlswagon 1 B in 1:100th? I couldn't see it in the pipeline list.

Well, we should release its 1:72nd version first :D

Jokes apart, it's true that our Pipeline not-so-short term provisions should be updated...

Anyway, it wouldn't be any of an issue to introduce it into our Pipeline right now --because, once you have the CAD design already done, there is no difficulty at re-scaling it...

Good point from you, Eric. Confirmed, we shall introduce the 1:100th Pz I B / Befehlswagen I B into our provisions shortly.