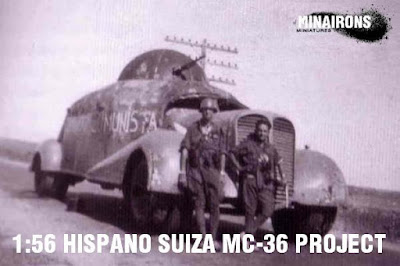 Well, that is. After lots of e-mails received and some time of hard thinking, we at Minairons Miniatures have finally taken the decision to launch a 1:56th scale SCW vehicles range, alongside with those already started in 1:72nd and 1:100th scales.

It hasn't been an easy decision by any means. For starting a plastic & resin range can be financially considered more or less sustainable, if in one single scale; while a somehow risky but exciting business to endeavour it in two scales altogether. However, committing oneself to a third scale in parallel, at so a tender stage of our firm... well, quite far from sustainable, unless some help from requesting hobbyists themselves is provided.

This is why we've agreed to put our multi-scale commitment under crowdfunding. Not under the popular Kickstarter portal, because its use is restricted to USA and UK residents only; but under IndieGogo instead --for it allows us doing so, that simple. 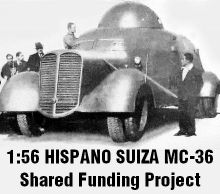 We'd like to start such 1:56th scale AFVs range with a rare, handsome and stylish armoured truck: the Hispano-Suiza MC-36, a competitor to Bilbao Armoured Car for equipping the "Guardia de Asalto" Spanish Republic's Police. Although finally lost the contest in favour of the cheaper Bilbaos, Hispano-Suizas didn't resign to lose their chance and saw action in Republican hands, in numbers of 5 – 15 vehicles, depending on sources. Some were captured by the Nationalists, and at least one of them experienced some improvement thanks to a cannibalized T-26 tank.

Please take a glance at our 1:56 Hispano-Suiza MC-36 Crowdfunding Project and support it!
Posted by Soldadets at 11:48 PM