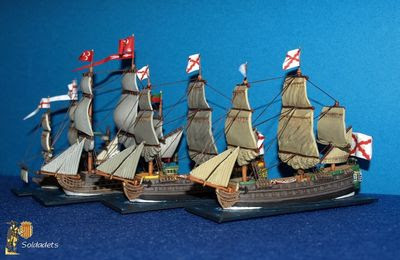 Today I've completed a painting job I was commissioned some months ago, consisting of 17 Peter Pig ships to be painted as either Spanish merchantmen or pirates. Only the two largest ones out of the commission were left, and these are what I'm going to show you now, along with a couple others that I've built for my own collection. 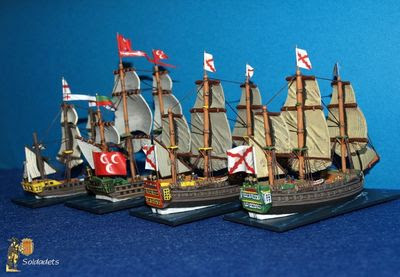 This time I've performed very few modifications on the ships --just replacing their original bowsprits. Both have been dressed as Spanish indiamen, so proudly flying large Burgundy Cross ensigns and mast flags. 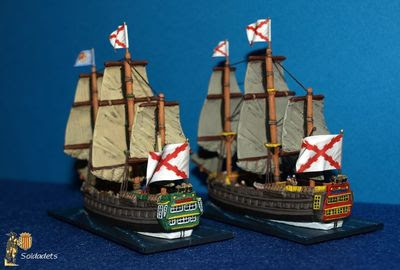 One of them has been given a different flag on foremast (a light blue one with the Spanish coat of arms), that was historically used by one admiral in WSS times. I thought it might be useful to the user --for identifying the Treasury Fleet admiral for instance, or a ship commanded by an able Reserve captain perhaps, or for whatever other reason he might need. 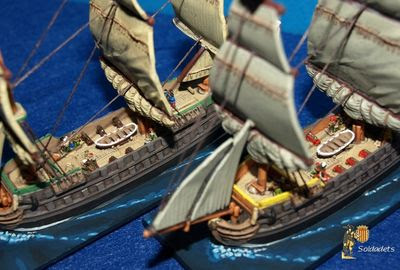 As you can see, decks are crowded with Peter Pig crewmen and guns, Minairons lifeboats and some unmanned guns from my spares box. 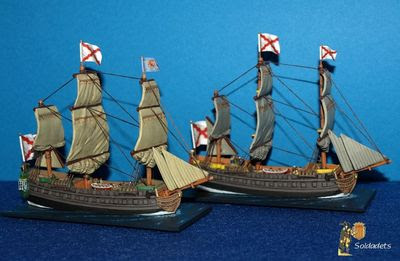 I've enjoyed this commission intensely, and would like to thank the commissioner for his patience and trust. Hope he likes the result not less than I do.

Posted by Soldadets at 6:26 PM