Sometimes, our designers are commissioned projects that lay apparently aside from our "official" pipeline and wishlist. Such is the case of the design I'm happy to present you now - the Vickers 105mm gun: 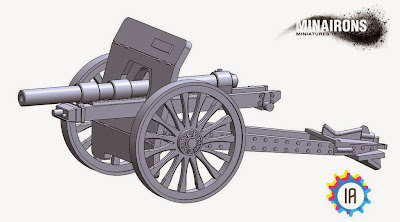 Not that aside, though. It belongs to a global project embracing several different models and figures - in a way quite similar to that other one including IGC Sadurní tank, carrier and tractor, altogether with the Schneider 155 howitzer. Besides, the fact of already having two guns (Schneider 155 and Vickers 105) will ultimately allow us to develop artillery crews for both sides - a set of figures admittedly long expected.

Following this global project concept, this new gun will be developed alongside to the Landesa tractor and a white metal driver - and released all together. The running gear we design for this tractor will be also useful for endeavouring next a Landesa improvised tank and last, the Trubia-Naval Basque tank too.

Back to our Vickers 105mm gun concept, it will consist of a pretty small number of parts - roughly, those you can see below: 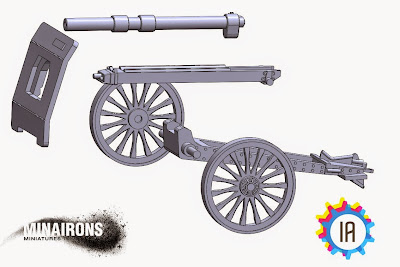 This whole series will be developed in 1/72 scale first, to be re-scaled later, as usual in Minairons lately.
Posted by Soldadets at 5:38 PM

Hooray! Great to see this gun moving forward in the queue.

Here's hope the kit will be available with the gun crew soon.

A couple of constructive hints, if you don't mind at this stage:

Some more detail should be added, like the breech, and the gun shield looks very thick. The wooden spokes should beemt behind / in the round center disks, not in front of them. The spade at the tail is in the travelling position so anybody wanting to depict the gun ready to fire would benefit from an additional part.

Hi Pat, thanks for your comments and suggestions. About the shield thickness, it is currently 1.2mm. I've already told the designer to await a likely reduction - it shouldn't be thicker than that of our own Schneider howitzer. About wheel spokes, please have in mind we've based our design on the licensed Spanish version, that also shows other differences with the British original (such as carriage, for instance), Anyway, I'll look into those issues you've pointed out. Thanks again!