Here it goes a sample I've painted for myself of the Carrier version of IGC Sadurní tank --one of the couple 1/72 AFVs we're going to release in the next few weeks: 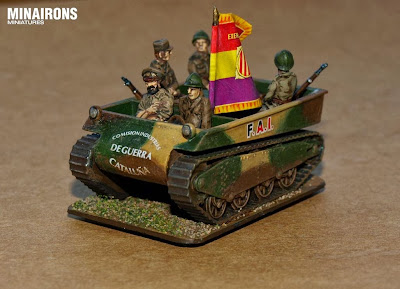 The crew you can see here is not the original one of this set, but a collection of modified figures of other makes. I don't remember where the driver comes from, but in any case its head was replaced by the Adrian helmeted one of a Pegasus Hobbies plastic french infantryman. The officer to his right is by Irregular. 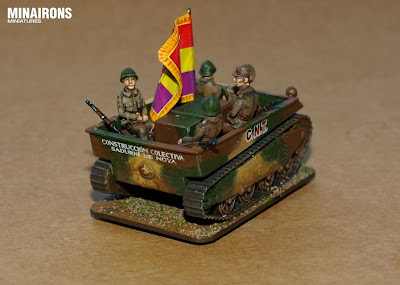 As for the soldiers carried on, they all are from Xan Miniatures catalogue: late war German soldiers, that have also suffered some modification. Two of them have been fitted Pegasus Hobbies heads too, while the third one's head has been swaped by that of a BUM soft plastic spanish republican soldier. Otherwise, decals and paper flag are Minairons own.

Here below you can see the ultimate crew of this nice AFV --depicted a few days ago, before completion. Now they're actually finished and on their way to foundry: 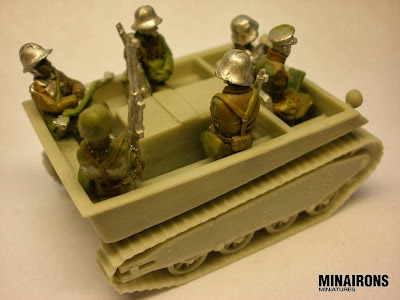 All these figures will be included in IGC Sadurní Carrier set (20GEV013), but are to be sold separately too, so as to allow their use as truck passengers or tank riders, under reference no. # 20GEF005.

As to have an idea on the vehicle size, here you have it depicted alongside to a (slightly modified) Universal Bren Carrier of Plastic Soldier Company: 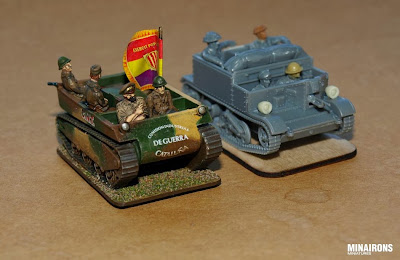 It must be admitted that Sadurní crew is relatively unprotected, if compared to that of Universal. It seems obvious that, had it been finally approved for mass production, Sadurní carrier walls should have been made one or two feet higher. BTW, here below you have a Sadurní carrier in an odd, what-if role as a VBCW alternative carrier for Scottish troops: 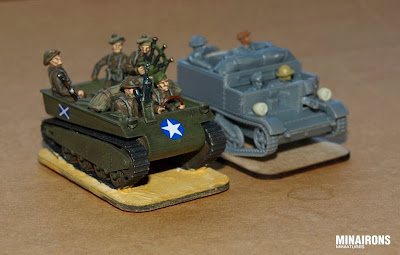 In this case, the (still unfinished) vehicle has been painted as if an eventual post-VBCW Scottish Republic had been thrown into WWII --on the Allied side, indeed. An unusual 5-pointed star pattern has been chosen, so as the blue in it matches with that of the Scottish flag.
Posted by Soldadets at 10:55 PM

Scottish markings! Fantastic...I wasn't planning buying your models at the moment but I have to have some of these! :)

Brilliant - Thank you from a Scot!