Following the article recently published that showed our Benach M1935 Fast Tank ultimate design, now I'm posting some complimentary views, so that its general look can be fully appreciated.

Let's see first of all the tank profile in on-wheels running mode, with regard to its normal on-tracks look. According to the patent text, the tracks would automatically withdraw and lay over the wheels. The whole strip would be kept tensioned thanks to a couple of removable supports --presumably aided by mid wheels, that were supposed to rise up automatically too. 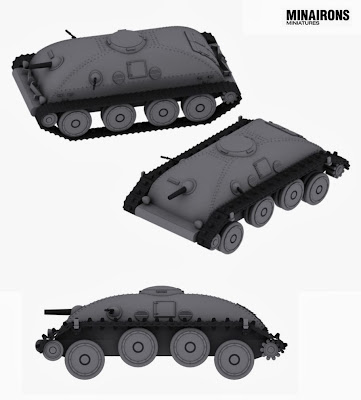 A decision we had to take was determining the tank size --for neither the original blueprints or patent ever bothered specifying such. At a first attempt, we found it likely to match its size with that of Christie M1932 Flying Tank, but we found this latter to be bigger than expected: 5.5 m long! Too large for the average European tank of that time, we thought. So we saw then to match our what-if Catalan AFV size to that of a slightly smaller tank sharing that same design: a Soviet BT-7, that measures just 4.5 m long. We felt fully satisfied with the result, so such is to be the ultimate size of our tank too. 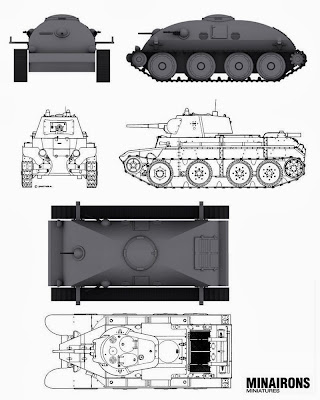 And last, this is the ultimate kit parts composition (sorry for the low resolution render!). As you can see anyway, hull is to be subdivided into two parts, in order to allow an empty inside and save some resin. Also, set will include two sets of running gears, with the aim to allow each one to build the model in the running mode he wishes. As a matter of fact, we've decided to pack the tank by the two in a box, so as to ease users choices. Quite obviously, the alternative running gears will have to be cast in white metal, rather than resin as the rest of kit. 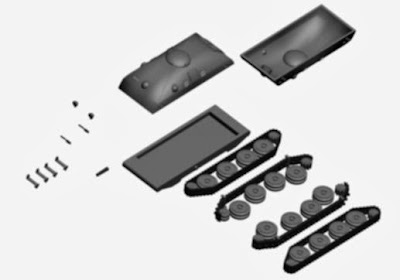 As for other accessories, the ultimate kit will include a decals sheet as usual. It's been a hard choice too, due to the what-if nature of this tank --so that we've had to choose what-if markings too: i.e. Turkish roundels for if the tank had been finally purchased by this country, Liverpool Free State markings so as to allow its eventual use in VBCW, Spanish Republican roundels to cover those settings that imply the involvement of the Spanish Republic in WWII at the time of Blitzkrieg, and last, Catalan Republican markings fulfilling a what-if French intervention in SCW after Ebro battle and the creation of a puppet state beyond its southern border.
Posted by Soldadets at 6:09 PM

IE can see this used in a number of interwar conflicts.

This would be perfect for my imagine-nation conflict