The designing process of our first resin model is already finished --quite satisfactorily, as you can see by the renders below: 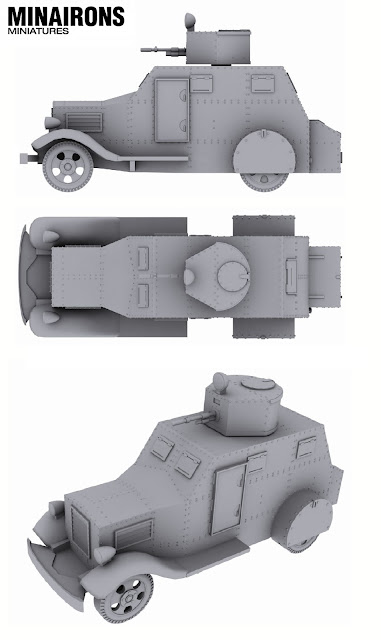 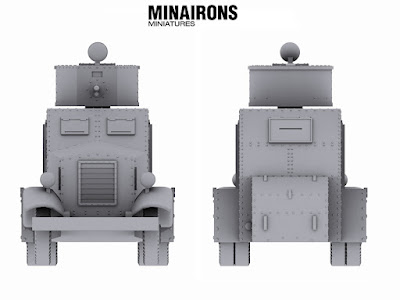 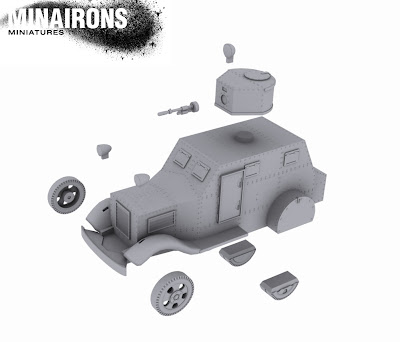 It's time now for mould making and some test shots, as well as some artwork, before this nice model is formally released. It not only enjoys a rotating turret, as you can see, but also its turret hatch can be opened. Model measures 54mm long and 20mm wide exactly --that is, a pure 1/100th scale!

Confidentially, I'm still a bit concerned about an eventual fragility of its machine gun. Such eventuality must be tested during our first mould shots. If such happens, I'm thinking about supplying it with a replacement metal machine gun.
Posted by Soldadets at 7:34 PM

I am very impressed. Can you tell me which sides this armored car was used by? Any chance the Carlists had some?

Hi Chris. "Bilbaos" were built since 1932 for riot fighting purposes. As such, some 36 of them were issued for the Guardia de Asalto State police (main cities' contingents). Alongside, other 12 were framed into a particular Cavalry unit of the Army (Grupo de Autoametralladoras-cañón de Caballería). At the outbreak of war, some 7 were captured by the Nationalists, while all the rest remained in Republican hands. I guess those captured were at Seville and Saragossa, or Vitoria perhaps, so it would be possible for some Navarrese or Andalusian Carlist Tercios to have enjoyed the support of 1-2 of them at one time. However, I'd bet that these vehicles were never put straightly into their hands, but kept in hands of Franco's own Security Forces instead.

Forget the resin MG - go with metal from the start. It's the only way to be sure.

Just what I suspected ;)

Any chance we'll see the bilbao in 1:72nd scale?

Have it for sure, Mark. We haven't scheduled it due to reasons we cannot explain yet. But we shall release it --sooner than later.