Sadly, our conversations with Falcata Miniaturas haven't resulted in the durable partnership agreement we'd have desired, due to a latest hour disagreement. However, neither of both firms has desisted from an eventual, looser kind of co-operation deal in a future. In spite of this rather unexpected setback, we at Minairons Miniatures still keep our own production schedules at full, as well as Falcata Miniatures also does --so that exciting news for you customers are expectable from both firms, in the short term.

As an evidence of such commitment, I'm pleased to confirm to you all that a new range of resin vehicles, 3D-designed by ours own, has just been started. This resin range is aimed at complimenting our regular plastic ranges, following a style consistent to these and using their very same scales. Thanks to such, we shall be able to produce rare or short-run AFVs as desired --by our own, with no subjection to third parties.

Our first model in this new range will be the charismatic Bilbao armoured car --to be released in 1/100th scale first. We're already designing it! 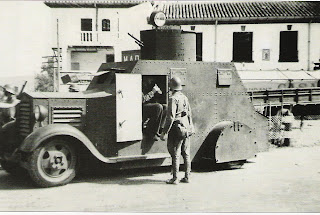 Also, we have just opened a new section in this blog, under the quite explicit name of "provisory catalogue" (click for a glance). This is intended to permanently show our current releasing expectations --as well as serving as some prequel to the future wishlist & working progression page we shall install in our final website, www.minairons.eu.

As for the mentioned website, work on it has taken speed lately, so that I can reasonably expect now to have it working just in time for our first release --that is, around mid-October.
Posted by Soldadets at 8:40 PM