Panzer I A second prototypes

As explained a few days ago, a 2nd set of 3 polyurethane resin prototypes of our PzKpfw I A was ordered. Such models would be destined to assembly testing, painting and photo studying by a talented professional painter --allow me some degree of mystery about his identity, for the moment. His work results are to be used mainly for box art designing, and secondly for promotion actions such as reviewing articles, banners, advertising and so.

Today I've been delivered the last one of these prototypes, which have been cast in black resin. I've hurriedly packed them into a parcel and sent it to its destination in Madrid, where the painter is already waiting for the models.

If curious, you can see below how do the prototypes look (sorry for the photo quality, I'm anything but good at this job): 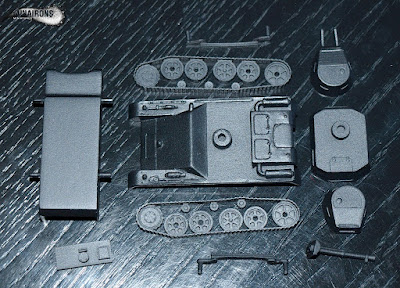 In some days more exciting news about our 1/72nd scale Panzer I A!

In the meanwhile, let me acknowledge you about a couple of news pieces: first of all, that the original Pz I A design has already been adapted for 1/100 scale too; and secondly we've just started our second Spanish Civil War AFV designing process...
Posted by Soldadets at 1:13 AM

Hi,
Will you produce the tank(s) with open turret hatches? I'm a sucker for exposed tank commanders. ;-)

Apologies for responding that late to your question! Your message had gone faded pending moderation, with no previous warning from Blogger about its existance --or I missed it, honestly.

The plastic tanks sprues are being designed with closed turret hatches due to both technical and financial reasons --but spare resin turrets with open hatches will be provided shortly. These will fully match with their plastic counterparts.