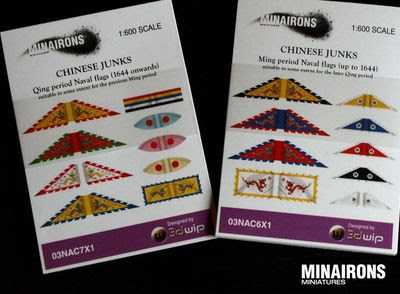 If anyone was missing some Far East naval powers ensigns and flags, in order to add some colour to their deadly war junks, I hope these two new releases will be useful and tempting enough to you! For I've just made available two new sets of 1:600th scale naval flags devoted to Chinese ships during Ming and Qing periods - quite roughly, between XVI and XIX centuries.

Despite splitted into two sheets, one for each period, most of the flags in them can be combined quite freely to some extent. Only tips to be held in mind there, are that red dragon flags were dominant during Ming dynasty, while blue dragons were preferred by the later Qing emperors; also, that Chinese ships used to place their ensign-like dragon flags not at stern, but on main mast instead. Sterns were often decorated with five smaller flags, one of each colour (at least during Ming period). And last, that red-dotted flags were apparently used by civilian ships only.

These are beautiful! Any chance in getting these in 28mm?
Cheers,
Sgt Guinness

Honestly, I think that 28mm-oriented ship makers should also provide for flags suitable to their own ships. Third parties like me would be risking to miss the shot!