In the last months, the British firm Peter Pig had resumed the expansion of its range #13, dedicated to the Spanish Civil War. A first result of their effort was a recent batch of "tiznao" armoured trucks such as Somua-Naval, Hispano Suiza 3T6, Constructora Field and Torras nº 4:

These were soon followed by a fifth "tiznao", MTM nº 1, as well as a civilian car, the Franklin Olympic sedan: 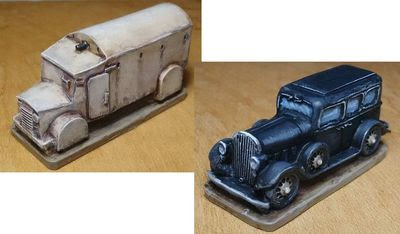 And more recently by two new civilian vehicles: a sedan car with excess luggage and a pickup van, both based on the Franklin Olympic. In addition, Peter Pig has released new references of spare heads for GCE, the one with straw hats while the other with Moroccan turbans. It should be commented too a third refrence devoted to female heads, which stands ideal for militia women: 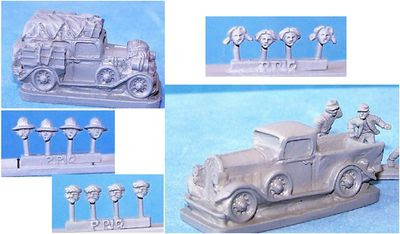 As some may already know, Minairons carries the complete range #13 from Peter Pig; it can be found within our 1/100 scale listings.

Posted by Soldadets at 7:43 PM

I think those heads in 1/72 would be an excellent idea.