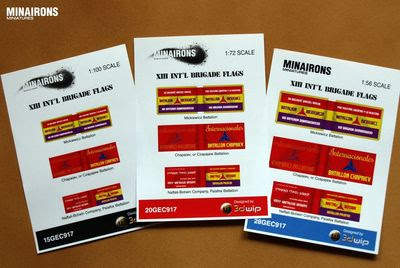 I'm proud to show you our latest release: a Spanish Civil War flags sheet in all three scales altogether (1/100, 1/72 and 1/56). This means that we've already started reproducing our sheets in this latter scale too, and the unit chosen for such landmark is the XIIIth International Brigade, also known as Dąbrowski Brigade (or Dombrowski, once transliterated into Spanish phonetics). This unit was formed by Polish subjects mainly, but also by volunteers from other Baltic countries and a significant portion of Eastern European Jews. Their flags letterings and mottos used to show a concurrence of Spanish, Polish and Yiddish languages, as you can see below.

BTW, all three sets can already be purchased from our www.minairons.eu website. 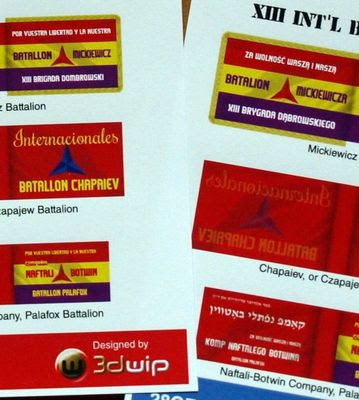 I'd like to take advantage of this new multiple release for starting a poll among our customers and friends: if going to make another set of flags devoted to one particular International Brigade, which one would you like to be first? (see poll at right)

Posted by Soldadets at 4:39 PM