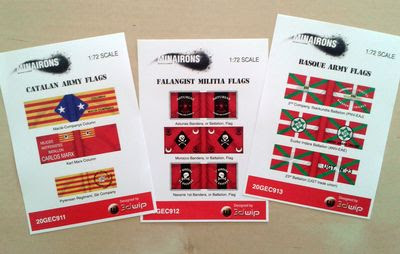 Once again, our range of 1:72 scale flags for 20mm Spanish Civil War gaming has just grown with three new sets: Catalan Army, Falangist militias and Basque Army. As customary, these A7 sized sheets contain three historical flag designs each, all slightly textured so as to simulate waving shadows.

After this addition, the above mentioned range now ascends to 13 different flag sheets, that can be found in this page. Such range will keep growing in the next months at a good pace; as a matter of fact, we are now preparing three new sets in this scale: Foreign Legion (already released for 15mm time ago), XI International Brigade and XIII International Brigade.

Posted by Soldadets at 5:06 PM