We've just launched three new SCW flags sets at 1:100th scale --that is, intended for 15mm wargaming. This time it's been the turn for Moroccan Regulars, Catalan Army and Falangist Militia, all them previously released in 1:72nd some weeks ago. 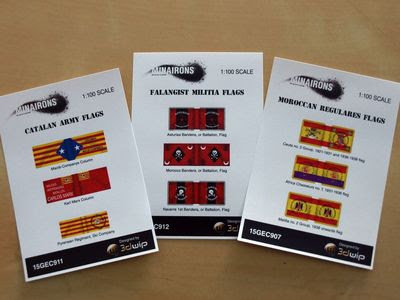 Range will keep growing next year, along with its sister collection of 1:72nd scale flags, also comprising 13 different sets. Besides, good news are also awaiting 28mm wargamers too!

Posted by Soldadets at 4:34 PM