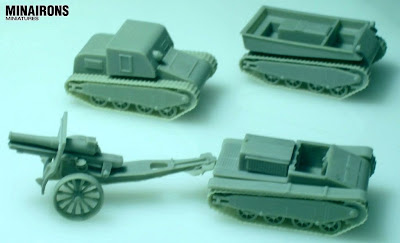 Coming out from workshop the very first prototypes at 1:72nd scale of the ill-known IGC Sadurní Catalan tank, in all its three versions: assault tank, universal carrier and artillery tractor --this latter, carrying a 155mm Schneider gun.

In spite of sharing some features, such as running gear and lower hull, the amount of parts exclusive to each variant has persuaded us not to make with it one single multi-option model kit; but three different, separate kits instead. The first one to be released is the Assault Tank version (20GEV001), whose releasing is scheduled for September 11th, Catalonia's National Day.

Here below you can see them compared to all three Panzer I versions alongside. Anything but a huge piece of armour, isn't it? 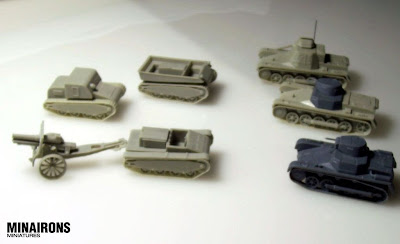 Apologies for the pictures quality, we definitely should take some lessons on it!
Posted by Soldadets at 11:37 AM

Great to see the first 155mm Schneider gun prototype. At this stage, it looks a bit bare detail-wise but that may be due to the current productions status. May I advise to check the wheels; the French version had 14 spokes (not the usual 12), but I don't know about the ones in Spanish use.

Schneider 155mm was ordonnance in Spain since 1921 or 1922. At first, these cannons were imported from France, but later were also produced under license at Trubia factory. Besides, such guns remained in active service until the 1950s - it is easy to deduce then that carriages diverged progressively from the 1920s original ones.

If surfing a bit the Net for SCW pictures, you'll see either 14 and 12 spoked wheels in action for any of both sides. There's a photo somewhere in the Net showing a battery with mixed wheels.

Thanks for your reply. If the Spanish used the 14 spoked wheels as well, that's great - so you can cater for both the SCW and the WW1 markets by producing the 14 spoked version :-)

We liked it better to represent the Spanish-made version of this gun, for in the end this is a SCW model kit.

However, have in mind that 12-spoked wheels are not exclusive of Spanish production, but can be also found among WW2 Finnish ordnance, for instance.

Besides, our kit already provides for an alternative rubber tyres wheeled version --another common variant, quite widespread from Inter-wars onwards.

You can find several rubber tyres variants too --even some 4-wheeled samples!

We cannot supply all the different wheels variants possible for this particular gun --at least, not in a single kit! Anyway, as soon as we have an opportunity, we can provide a special set of wheels --that should be sold apart, though.

I'll be watching with interest, and hoping for crew figures as earlier suggested by you :-)

Does this just published thread answer you? [url]http://minairons-news.blogspot.com/2013/08/spanish-republican-tank-riders.html[/url] :)