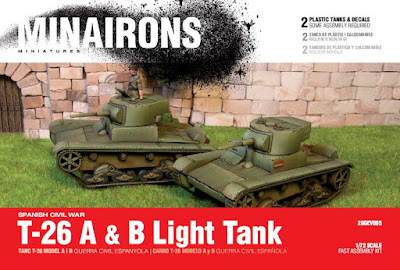 After a good amount of co-operative hard work, we are immensely happy to acknowledge you all that our so long expected 1:72nd scale T-26 tank mod. A & B is already coming out from factory!! 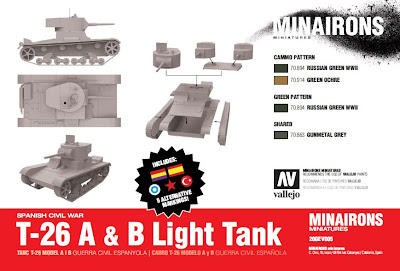 Minairons' T-26 tanks come in a sprue consisting of only 10 parts --3 of which are intended for an alternative build of the twin-turreted "A" version. Following recommendations issued by several sources including those from a well-known magazine significant contributor, this time the main gun turret includes a hatchet that can be opened, as well as an optional tank commander torso. 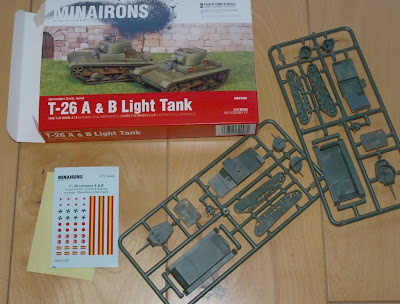 These new tanks are available in a 2-sprues box, also including a decals sheet with national markings for a good number of Soviet, Finnish, Turkish and Spanish (both Republican and Nationalist) tanks. The whole set retails on our webshop at EUR 13.95. Here below you have some captions of this new fast build tank! 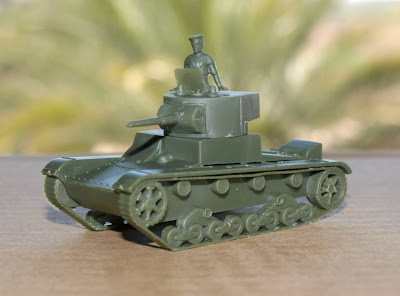 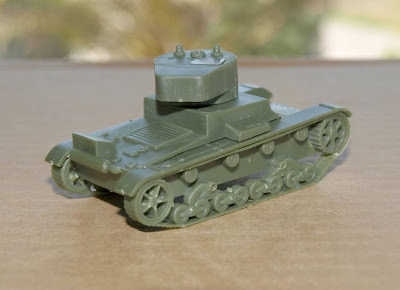 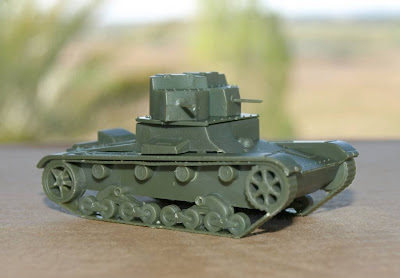 A first batch of our newly born T-26 tanks is already flying toward Caliver Books HQ in England, so that they'll be hopefully awaiting YOU at Salute 2013 --in Caliver Books' own stand.

DON'T MISS THE CHANCE AND REINFORCE NOW YOUR FAVOURITE INTER-WARS, SCW OR EARLY WWII ARMY!
Posted by Soldadets at 1:18 PM

I just ordered two boxes of T-26s and a box of Pz1. Now to sit back and wait for the postman.

Just seen your order, Thomas. I'll try and do my best to have it shipped tomorrow.

Picked up the packet from the post office last night and built two T-26 and one Pz1 right away. Lovely models!
You guys have done good!

Glad you liked them :) Are you planning to paint them as Finnish? I'd like to see some pictures of them, once finished up!

First two built. Pics of the process on my blog/painting diary.
http://getitpainted.blogspot.se/2013/04/minairon-tanks-part-1-building.html

First one finished.
http://getitpainted.blogspot.se/2013/05/first-minairon-t-26-finished.html
Loving them!

Just a question, if you don't mind: my designer and I have been thinking a lot around BA-3/6 armoured truck lately. Would you find it wise to design it as to be optionally built as a BA-I? Alternatively, we might choose to give it an optional BT-2 turret (for it seems that some BA-6 were fitted that uncommon turret).

What do you think about these options? If in the need to choose one of both, which one would you select for the ultimate design?

(Just for collecting opinions and help making up mine own)

I think BA-I would be the thing. If I want to add a BT-2 turret to my BA-6 I can find it easily and kitbash. The BA-I is a lot harder to make myself.

Can't wait to build them, having just built a Mirage and UM Models T-26 variants with 6 million wheel parts, these look to be a joy in comparision. Measuring alongside the hull pieces, yours comes out exactly the same length, which is a good sign.

Sirs, lots of thanks for your so encouraging comments!

Thomas, one question: where would you draw the BT-2 turret from? ...another model kit? which one?

I'm asking this because, after the T-26 experience, we're dealing with the possibility of making a separate T-26 turret sprue.

On one side, we'd have that mini-sprue available for whatever model else using that particular turret --thus making it unnecessary to bring it to moulds once and once again.

On the other side, as for the BA's case, this would leave a lot of room available in the model sprue itself --not just for one, but two supplementary turrets.

And now the milion bucks question: would it be worth making the BA's in 1/72nd, given the success of Pegasus Hobbies own BA-6?

It wouldn't be worth doing a 1/72 Ba-6 unless you can add something substantial that the Pegasus one doesn't have. EG Ba-1 and Ba-9 turrets, or conversion part to make the turretless APC variant from 1942-43. Am not sure these count as substantial enough. You do already include decals with kits that Pegasus don't, so there is that....

I have the Pegasus Ba-6 models, they are very easy to put together, even though the suspension parts look delicate.