Following some months of hard working, I've finally managed to start a brand new miniatures company, willingly devoted to producing multi-scale hard plastic models and miniatures. It has been christianized as Minairons miniatures (www.minairons.eu) and it's aimed at producing figures and vehicles straightly related to the military history of Catalonia --and the whole Iberian Peninsula.

After some thinking about what range to start with, I've finally chosen a selection of Spanish Civil War vehicles --either armoured or softskins. Therefore, Minairons miniatures' first product is going to be that one whose 3D-printing protoype can be seen next: 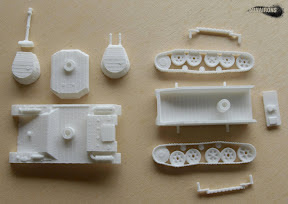 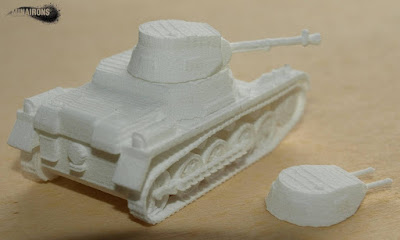 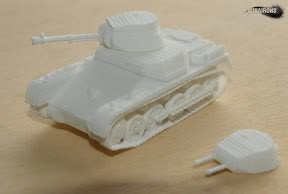 That is, a fast assembly Panzer I Ausf. A with two optional turrets: the standard one and the 20mm Breda gun "modificado" turret.

This is quite of a crude first prototype, naturally. PLA 3D-prototyping couldn't provide a better resolution for this particular design, due to some tiny details --nevertheless, it excels at being a fast, cheap method for verifying your model basic characteristics, as well as for checking parts fitting and eventual flaws. Of course, final model will show a perfect detail and surfaces sharpness.

Each sprue will have up to 10 parts for one single model --including both alternative turrets. Packaging of this particular model will include 2 to 3 sprues and a decalsheet suitable not only for Spanish Nationalist tanks, but early German and Kuomintang Chinese too.

Not to be too optimistic about term provisions, releasing should be expected for mid-late summer.

What scale: I would simply lie if denied to have PSC as a model of excellence. It would be my aim to follow closely their path --as long as I can follow it. Therefore, I'm planning to release my models at 1:72nd scale first, but will produce them later at 1:100th or 1:56th too, depending on market response.

This our first model (Panzer I Ausf. A) has nearly guaranteed its releasing in 1:100th too.
Posted by Soldadets at 1:36 PM