More on the same painting commission 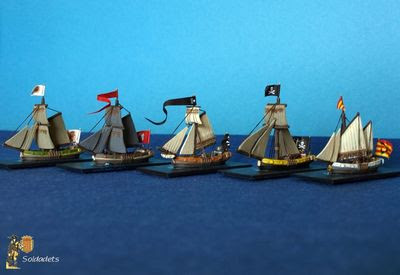 Some ships else added to the current commission. It's been now the turn for the smaller ships in the client's collection, a total of five single-masted sloops --one of which, painted as a Spanish escort warship while the rest have been dressed as pirates. 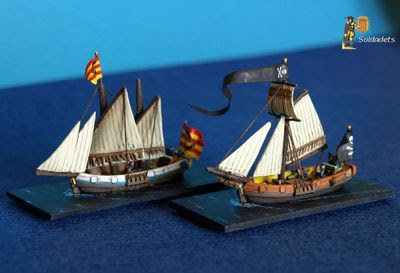 As it can be seen by the picture above, one of the pirate ships has had a second mast attached to transform it into a lateen sailed tartane. Although own to the Mediterranean Sea, tartanes and other lateen rigged ships were'nt uncommon at all in the Caribbean --manned by French and Spanish crews mainly, but also by Italian or Maghribian sailors in foreign service. I've taken advantage of this for assigning her a red-yellow striped flag, supposedly flown by one Edmund Cooke, but that could also belong to a French or Catalan buccaneer (even it could do for a Barbary pirate!). 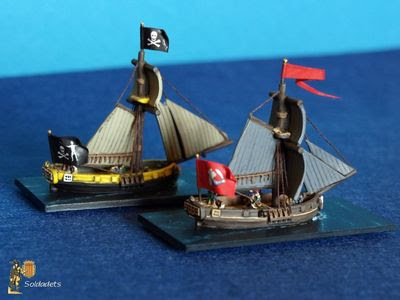 The other three pirate sloops show slightly different rigging configurations, making them close to either a 'pure' Bermuda sloop, or to a square course sail cutter instead. All this, with the aim to make every ship unique. Spare parts from brands other than PP have been used for this, as well as some conveniently shaped plasticard pieces. 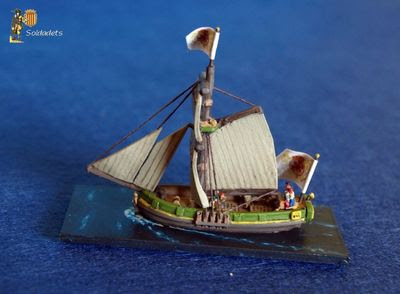 On its side, the Spanish escort ship follows quite a standard pattern, with no other modification than making the gaff sail a bit smaller. After this batch, the current commission is almost over now --there are left only two large indiamen, that I've already started painting.

Posted by Soldadets at 7:04 PM