This month I've started working on a new painting commission, that is to consist of a dozen and a half of model ships from Peter Pig, split into two opposite fleets (Spanish merchant and Pirate). I've planned to paint them by batches of five models, as got accustomed to lately; and I've chosen to start with the merchant fleet's five small/medium ships (two galleons and three fluyts). Here below you can see the results: 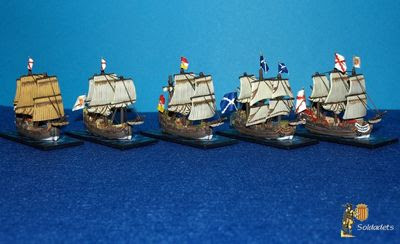 The pattern followed for painting them is the same already explained somewhere before: chocolate brown with a drop of neutral grey for hulls, dark leather brown for masts, pale sand for sails and a mix of iraqui sand and tan yellow for upper decks. Other colours I also use for sails from time to time are sunny skin tone (like one of the ships in this batch), stone grey or neutral grey. Accordingly to the customer's wishes, his merchant fleet had to be dressed as Spanish, and that's what I've done --with some particularities, as you'll see later. Let's go for the galleons first: 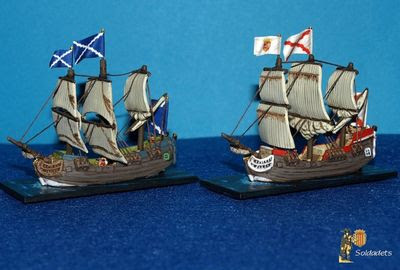 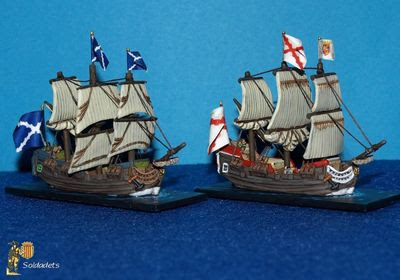 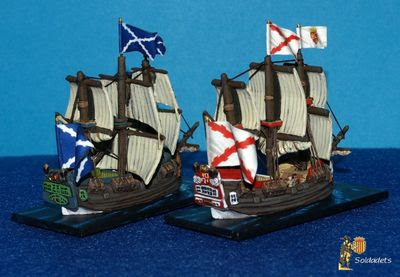 The ship at pictures' right has been given regulation merchant flags for the 1701-1785 period (red cross of Burgundy on a white field), but the other one is hoisting an ill-known set of flags (white cross on blue). This odd design first appeared during the War of Spanish Succession (1701-1715)intentionally used by Spanish merchants with the hope to be confused with French from a distance. To get an idea on what they pretended, take a glance on this fluyt belonging to my own collection. Although actively fought by authorities, this practice seemingly continued well into the 1760s. Let's go now for the three fluyts: 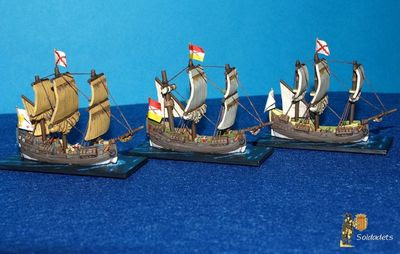 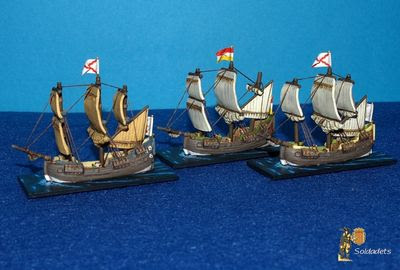 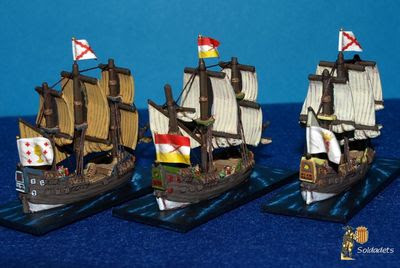 Again, some rigging features have been modified, with the ultimate purpose that not two ships of the same type are looking identical. Please note that their flags are smaller than those of the galleons (so as to emphasize ships' own size difference). Once again, here there are some differences in flags too: the ship at the left is flying a Galician ensign, while the one at the right shows a Castilian one (both likely used on coastal waters mainly). The ship in the middle is hoisting a colourful set of Southern Dutch flags.

Posted by Soldadets at 9:38 AM