Those of you fond of 18th c. gaming know that several brands are already offering quite comprehensive ranges of flags in virtually all the scales this period is gamed in. Would it be any room for another one, then? So I think, indeed. The reason why is that very few of the existing collections (if any) do include the armies of the peninsular theatre itself: either the flags own to Philip V and Charles VI, or even the Portuguese ones.

Helping to fill such huge gap is my intended goal. Therefore, following the request of a customer, Minairons is about to start editing a thoroughful range of War of Spanish Succession (1701-1715) military unit flags.

We are planning to produce such flags as small DIN A7 sheets (as customary amongst us) comprising two flag designs --the King's colour and the Regiment's colour of one given unit each. Sets will be designed primarily for 15, 20 and 28mm altogether; with a door open to edit them later for 6 and 10mm too, depending on demand. 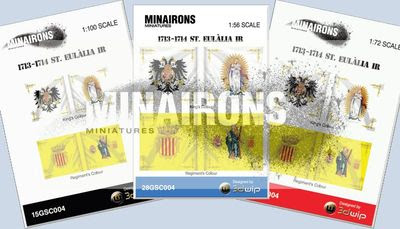 Once a given set is designed and edited, its 28mm version will be immediately taken to printshop and made available. Otherwise, the 20 and 15mm versions of it will be put in webshop under pre-order status, awaiting user orders on them; so that a range will be printed when is met a minimum number of requests on the sheets belonging to it. Provisionally, I've set that minimum to hundred (100) units.

If eventually a given range (15 or 20mm) does not meet such minimum after a period of time, then I'll resign taking it to printshop; anyway, I'll make the affected sheets available alike, but as a downloadable PDF instead. Let's suppose provisionally a 3 months' term for doing so. 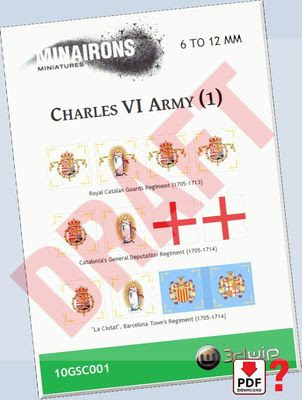 As already commented above, I'm planning to leave room for reproducing the range in 6 and 10mm too, depending on your requests. On this matter, there are still some decisions around to be taken, affecting product format (printed paper? PDF? 6-10mm versions separate or combined? and so). Let's take some time to keep thinking around, still. Your comments at regard can be decisive.

Posted by Soldadets at 6:58 PM