Unless something starts going seriously wrong, I expect this will be my last update on our Spanish galleon designing project, before we plunge into the process of tooling it for production. 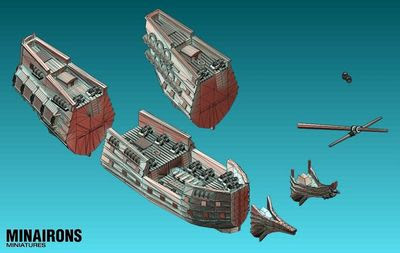 After all, as you can see by the image above, we have designed the model with two alternative bows and sterns, to reflect the design changes suffered by the ship over the centuries. Thanks to this artifice, we shall be able to launch not just one but two different galleons (sharing a central hull, but with interchangeable bow and stern pieces, in order to facilitate the construction of hybrid models).

In the end, this is the shape our upcoming 03NAV001 Early Galleon is going to take: 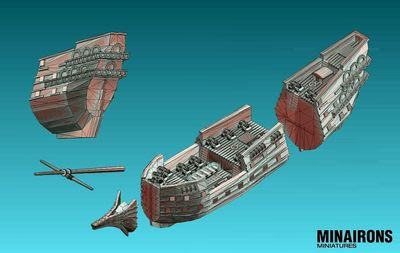 And this is what the 03NAV006 Late Galleon following afterward is going to look like: 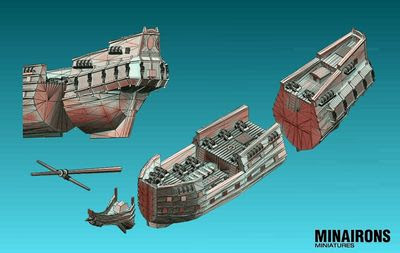 That's not all though, because we have also designed each mast in two different configurations: with either fully unfolded and partially furled sails. As both kits' masts will be interchangeable too, this will allow for even more customization and variations. 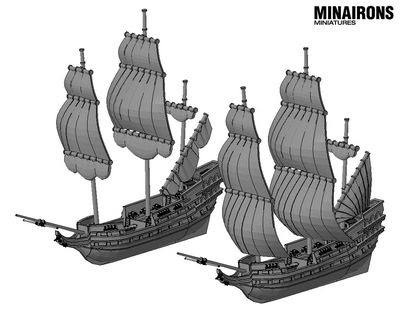 Worth to confirm that ultimate model kits will be waterline (despite drawings above are showing hulls complete to keel).

As already announced, we shall start releasing soon a collection of naval flags suitable for this upcoming ships range. Our first releases are to comprise ensigns, jacks and pennants for Spanish, Portuguese, Catalan, French and Ottoman ships (either men-of-war and merchants/privateers); but we've also set recently a poll to help determine real priorities in this matter among users. Please help us decide by answering it!

Posted by Soldadets at 6:23 PM

What is the actual size in inches?

Thank you for the reply.

Is that 9 cm for just the hull or including the bow mast?

It's 90 mm for hull, from bow to stern.
If also counting the bowsprit, total length would raise up to 95 or 97 mm, approximately.

Those are really lovely, I'll take half a dozen.
Any idea of when they might be available for purchase?
Claes

Now that 3D design job is over, things ought to run smoothly now. However, we still are to face 3D-printing, master model polishing and tooling. Once a first production batch is cast, I'll have to bring a couple of samples to a pro painter for boxart purposes. So... despite being smoother now, there's some amount of work ahead still. I think that around October, hardly earlier.

Most exciting new releases in the Age of Sail in many Years.

Suggest a Carrack like La Regazona for the Spanish Armada (this vessel has been overlooked by 1/600 Skytrex, but there were many carracks in the armada, etc. as well as being used by the Portuguese.

Would love to see the French 38 gun men of war which faced the later Spanish Galleons of the 1630 to 1660 era.

Of course, a generic "pirate ship" of about 20 guns would be very popular for all comers, I am sure.