Please allow me a few words to explain my long lasting silence of the last weeks. Last month, my wife suffered an accident by which she got her left ball joint broken into pieces, after slipping on a wet pavement and falling to ground with so a bad luck that all her (otherwise light) weight struck violently onto her left knee. Such unfortunate accident has left me with little time free for anything else than taking your kind orders, so nearly no other noticeable activity from Minairons has been observed for one long month. She's recovering fast and in good shape though, so I'm currently feeling pretty optimistic --despite she's going to require intensive care for a while still, so my own activity isn't going to retake a regular rate for some weeks yet.

While awaiting the moment to resume a regular activity, let me show you a latest hour addition to our 1:100th and 1:72nd scales SCW ranges: Harley-Davidson Flathead motorcycle, a vehicle widely used in Spain --especially by the Assault Guards but also by other Republican regular units. 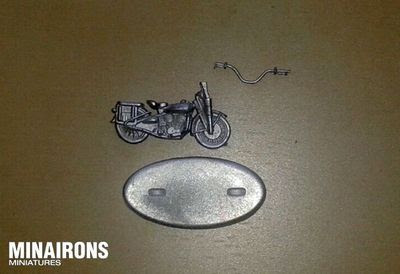 This is in fact the vehicle-only version of a rider-bike set already released both in 1:100th and 1:72nd scales some time ago, thus allowing to users the chance to use the motorcycle separately from a rider, for their own purposes. The 15mm version blister comprises two motorbikes while just one the 20mm version --both inclusive of optional stands, and both selling at €2.95 the blister. 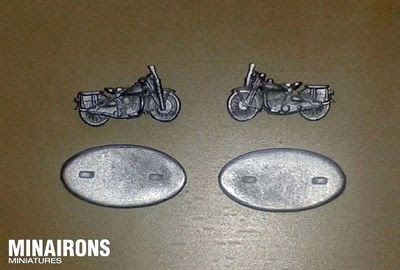 More exciting news are awaiting their turn to be released. Please keep tuned!

Nasty injury, great to hear she is recovering.

Excellent news on the 1/72 front, producing in metal or resin?

Matt, thanks for your wishes. About the bikes themselves, both versions are white metal - as their optional stands are too.

Excellent, I will add them to the collection shortly