A smaller set of WSS flags 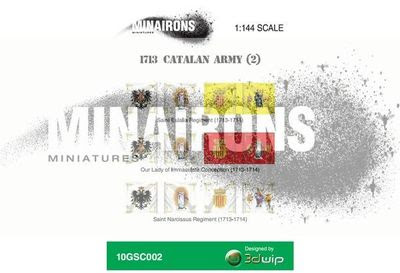 Just as promised some time ago, here you have a smaller version of the War of Spanish Succession infantry flag sets we had been releasing at 1/100, 1/72 and 1/56 scales so far. This new range of infantry flags is scaled to 1/144, so suitable directly for 10 to 12mm figures --but it can be used for 6 to 8mm too, if conveniently rescaled.

The new range flags are 12mm high, so that a single DIN A7 sized PDF sheet allows room enough for 6 flags belonging to 3 different regiments of foot (King's and Colonel's colours), that we're selling for just €2.00.