The three first sets of our new 1:600 Age of Sail range are already available. Each consists of a DIN A7 sized paper sheet with several maritime flags and pennant, conceived for a particular ship type and nation. The first three ones just launched are devoted to Spanish and Portuguese trans-atlantic galleons as well as a generic French Indiaman, and will be shortly followed by other sets; for it's our purpose to have a consistently large collection of flags at disposal of users at the time of releasing the first ship models. 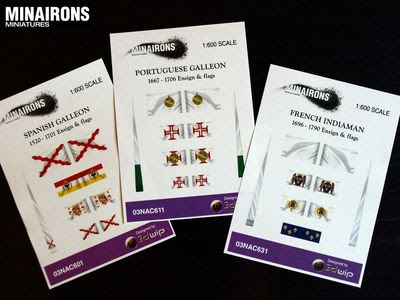 Flags have been designed as a first instance to serve as ensign the largest, as complementary or alternative mast flags the medium sized ones, and a likely jack if needed the smallest one. I think it's also worth to advance that medium sized flags will be designed so that some can be used as ensign for smaller ships. Others will be interchangable from one set to another, so as to serve as (likely if not purely historical) rank flags or other purposes; I'm thinking of English Squadron mast flags, for instance. You will see what I mean as collection grows. 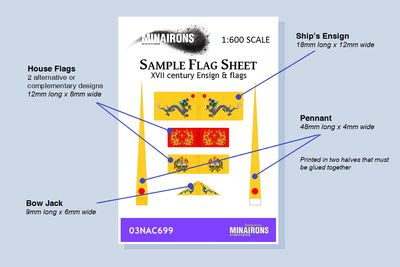 It's probable that many users aren't going to hoist all these flags on a single ship, or aren't going to use them as conceived at start --but we thought it good to give the maximum number of choices in such a small sheet. And last but not least, despite conceived to complement our upcoming range of ships (scaled to 1:600, as said), our flags will perfectly fit onto models from other makes --even those nominally larger such as Peter Pig's 1:450 scale ships, as my own experience as a gamer can attest.

New sets can be acquired from our website at the price of €2.00 each. As already commented, they'll be shortly followed by some flag sheets else, accordingly to the current schedule shown in this page of Minairons Blog --and several more awaiting a chance in Minairons' Wishlist page.

Posted by Soldadets at 6:32 PM