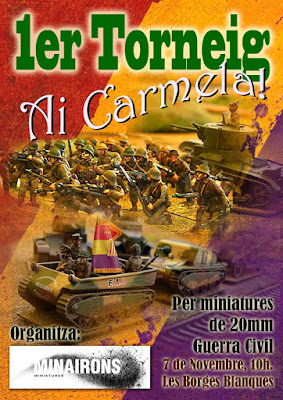 Last month, the town of Les Borges Blanques in western Catalonia hosted the 4th edition of its promising Modelism and Wargames Fair. We at Minairons Miniatures not only attended to it, but eagerly co-operated with FOWTarna club to organize a wargaming event therein, that was christened as 1st "Ai Carmela!" SCW tournament. The picture below shows the participants chatting with the Mayor of Les Borges Blanques and a representative of the Government of Catalonia (=Generalitat), who took an interest in being explained the core concept of wargaming. 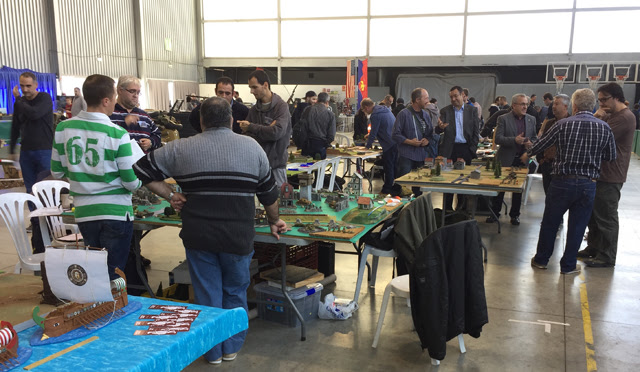 Despite its name suggesting a competition, the event itself wasn't conceived as a true tournament with a competitive setup or a final ranking. Instead, we preferred to use it as an introductory to Spanish Civil War wargaming, with the aim to attract potential gamers to this particular setting. So tournament was organized around two different kinds of scenario, with a separate army list for each contender as normal, but also a common reserve pool including air support, long range artillery or armoured reserves that had to be dealt and shared among player belonging to the same side. 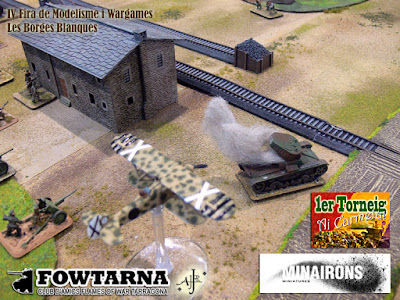 To some extent, this 1st "Ai Carmela!" tournament had much of an experiment. We weren't prone to waste the time of our gamers to learn an entirely new ruleset, but to allow them to happily throw themselves into gaming with little previous explanations. Due to such practical reasons, we chose for this edition to be run using Spain in Flames supplement of Flames of War, a ruleset widely known among Catalan and Spanish gamers. We don't discard to use a different ruleset in further editions but there will be no changes to the gaming scale chosen, though. It will keep being 1/72 (=20mm). Quite logical, isn't it? 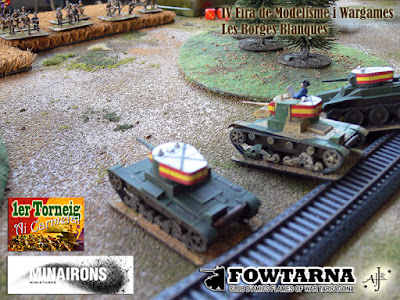 Tournament incorporated some funny optional and home brewed rules, such as one regarding the use of paramedics, or the rather unpredictable behaviour of some of the FoW objectives on table. Besides, we tried to enhance the event look using abundant scenery items, and complemented the ensemble with an exhibition table plentiful of painted stuff --from either Minairons and other makes. 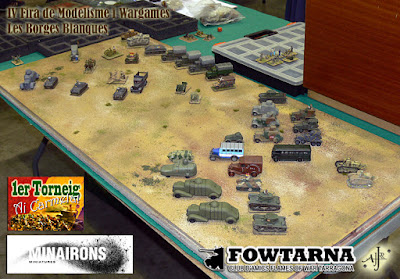 We'd like to thank the kindness and proactivity of Les Borges Blanques IV Modelism and Wargames Fair team, as well as FOWTarna crew for their commitment to this experimental tournament success. Next year we'll be there again, for sure!

If willing to watch a complete slide show on the event, please use this link.
Posted by Soldadets at 6:06 PM