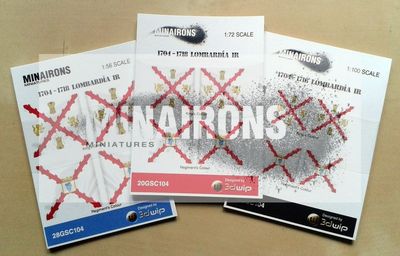 I'm pleased to announce release of a new set of War of the Spanish Succession flags, at 1/56th, 1/72nd and 1/100th scales together as usual. This new set stands for the Spanish "Lombardy" Infantry Regiment and comprises both King's and Battalion's colours.

Also, I've released a small guide giving some orientation on history of uniforms, flags and the unit itself, which is already available on www.minairons.eu website as a PDF file for free download. 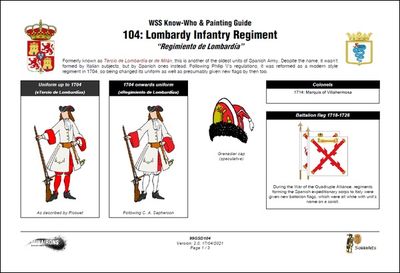 Posted by Soldadets at 11:30 AM No comments: 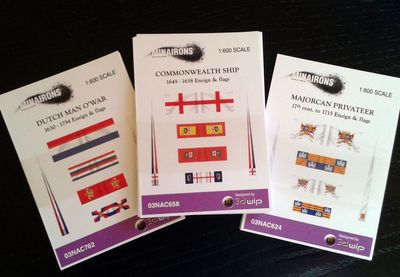 Posted by Soldadets at 10:31 PM No comments:

I'm proud to announce release of a new set of War of Spanish Succession flag sets, printed in 1/100, 1/72 and 1/56 scales altogether as usual. New set is devoted to the renowned Charles Habsburg's Catalan Guards, an elite fighting and bodyguard infantry regiment raised in November 1705 amongst the so-called "vigatans" - a name standing for the original group of notables from Vic town who forged with England the Treaty of Genoa, by which Catalonia would raise in arms and side with Charles Habsburg's cause. 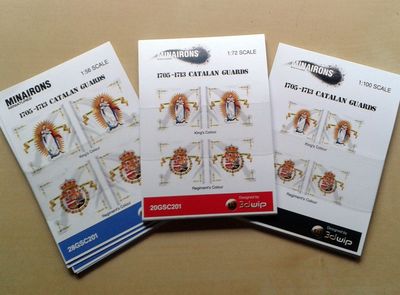 Along with the forementioned flag sets I've also released a free painting guide for this colourful guard regiment - as a PDF file for free download, as customary too. 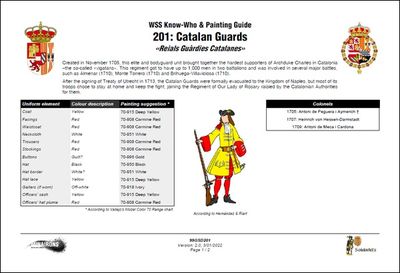 Note to those eventually interested in my WSS painting guides: I've detected an error in my website by which it was not always downloaded the requested PDF file. Such error has just been fixed, so you can now download properly such regimental guides. Apologies for eventual inconveniences!

Posted by Soldadets at 10:58 PM No comments:

More about the WSS range

As some of you do already know, we at Minairons are preparing a new range of War of Spanish Succession 20mm metal figures, to be sculpted by Leonid Primachenko. We're going to start the range with a couple of Austro-Catalan Mountain Fusilier sets - perhaps better known as they were nicknamed, Miquelets (or Migueletes in Spanish).

The first set will consist of 4 soldiers in campaign dress and heavily armed with musket and a couple of pistols in a side apron, all showing different skirmishing poses:

The second set will comprise an officer, an NCO and a horn blower. While showing a commanding pose, the officer is armed just as his men with musket and pistols. The NCO is calmly looking forward while smoking on pipe, with the musket at his side. As per Charles Habsburg's regulations, Mountain Fusiliers regiments were not supposed to have flags, but it can't be discarded that some units carried a standard to their colonel's taste (especially if irregular, volunteer units). If following Catalan folk-lore, these might likely be all black flags, St. George's crosses or double-headed eagles. So the NCO could be easily converted into a standard bearer if desired.

As for the horn blower (or should I say 'sea shell blower' for once?), please notice his hat is crowned by a side feather - usually blue. He's shown while blowing the sea shell. Such unusual instrument is attributed to the medieval Almogavars heritage Mountain Fusiliers alleged - one of the features sustaining their strong esprit de corps.

We expect to release those first sets over this Autumn - although we might make them available earlier as pre-order, if asked to. I can't give a quotation for them so soon, but a price of €4.95 for a 4 figure set (or €3.95 for a 3 figure one) seems quite likely right now.

The Corpo Truppe Volontarie (CTV) was an expeditionary force sent by Italy to Spain to support the Nationalist forces during the Spanish Civil War. Their land forces consisted of around 50,000 men in four divisions (Littorio, Dio lo Vuole, Fiamme Nere and Penne Nere); among these, Littorio was the only fully motorized one, besides of enjoying an armoured force too. 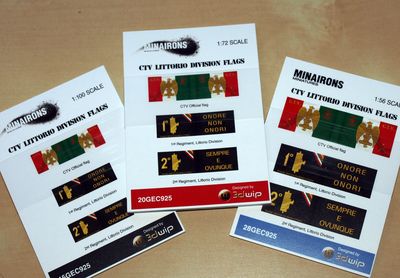 Posted by Soldadets at 5:11 PM No comments:

After a lot of time spent thinking around (years, actually!), this month I've finally taken the decision to start a new range of War of the Spanish Succession 1/72 figures, dedicated mainly to the too often forgotten peninsular armies; not just Philip d'Anjou's army, but also that one of Charles Habsburg - hopefully extending with time to Portuguese troops too, depending on this new range rate of success. 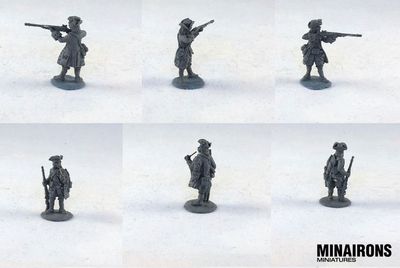 After some talk with other knowledgeable professionals, I've commissioned this new range to the well-known sculptor Leonid Primachenko, who has already excelled at sculpting horse & musket figures for other manufacturers. If taking a look at the pictures in this post, I believe you'll agree this is going to be a very promising range!

First figures commissioned are the couple of Austro-Catalan Mountain Fusiliers or Miquelets that you can see in pictures, that will be accompanied by another two figures to form a first set of 4 skirmishing fusiliers. A further set to follow shortly afterwards will comprise a Miquelets officer and horn blower. 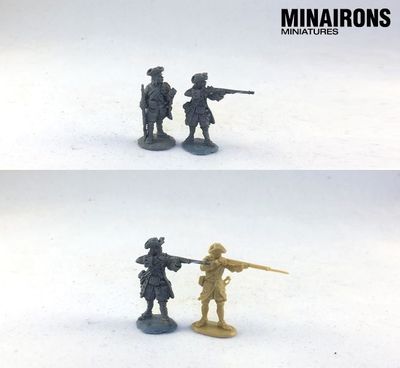 Figures are to be around 20-21mm tall from feet to eyebrows, so 1/72 scale compatible. Here above you can see how does one of our figures compare to a GNW musketeer from Zvezda. 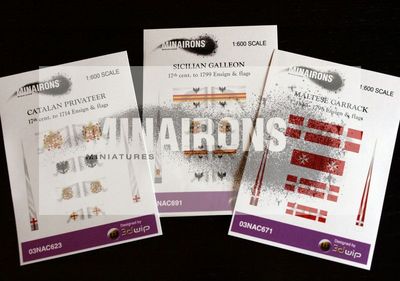 I'm pleased to show you our three latest Age of Sail flag sets at 1/600 scale; this time, all three are related to Mediterranean sea powers - starting with the Saint John's Cross of a Maltese warship, along with the flags for Catalan and Sicilian merchantmen or privateers.

If interested in such range, please don't hesitate and write to us for suggesting new designs! 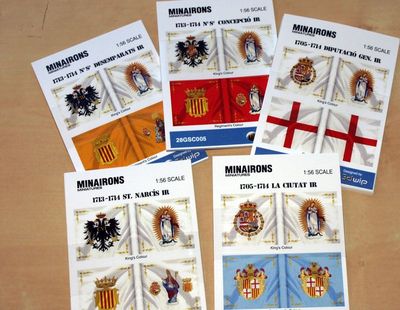 All my War of the Spanish Succession flag ranges have already been converted into pro printed paper sheets, from their old PDF versions. All them are now available as printed DIN A7 sized sheets comprising one King's and one Regiment's colour each.

If interested in those, please don't hesitate and write to us for suggesting new designs!