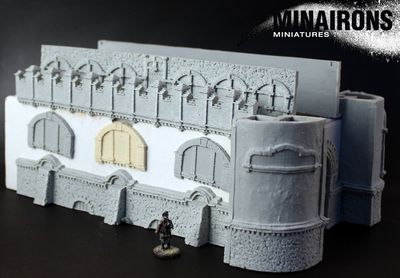 Despite still awaiting a roof to top the thing, I've thought you would like to see what our upcoming modernist styled Catalonian Wine Cellar is starting to look like. Better than trying to explain it in words, let's share a few captions on the prototype: 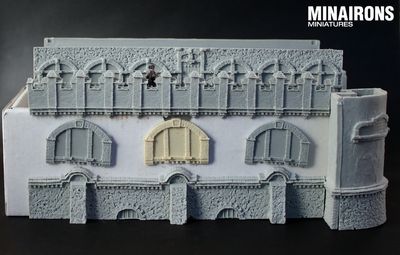 Please note the main trick we're using to make a relatively lightweight model kit from this otherwise massive building: the thick cardboard box of its packaging is going to be the building main body, on which socles, windows, false towers, terraces and other architectural details are to be fixed, so as to build the ultimate kit. 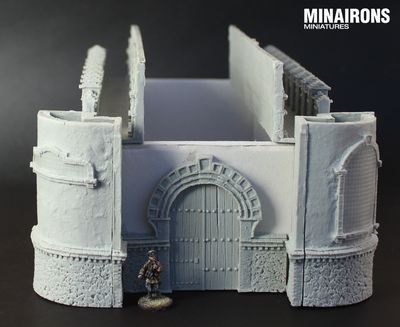 Such trick will allow us to set an affordable pricing for the model kit, as well as to keep its total weight below 400g --a measure that ought to permit shipping expenses economy too, while still allowing for a durable, tough model building on tabletop. 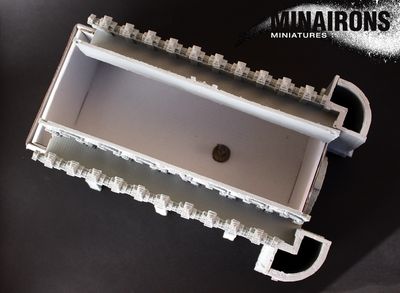 Two long side terraces will allow for miniatures to be placed on top, so as to help using the building not just as a simple background decoration, but as a terrain element by itself. And last, users will have the choice not to glue the roof on top, thus allowing indoor practicability too.

Posted by Soldadets at 5:25 PM No comments:

We've just launched three new SCW flags sets at 1:100th scale --that is, intended for 15mm wargaming. This time it's been the turn for Moroccan Regulars, Catalan Army and Falangist Militia, all them previously released in 1:72nd some weeks ago. 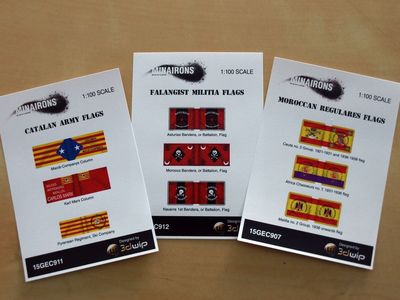 Range will keep growing next year, along with its sister collection of 1:72nd scale flags, also comprising 13 different sets. Besides, good news are also awaiting 28mm wargamers too!

Posted by Soldadets at 4:34 PM No comments:

I believe this will be exciting news for all 20mm SCW wargamers: we at Minairons are about to start a new 1:72 scale scenery range, specifically intended for re-creating the common (and not-so-common) Spanish landscapes of those years.

True that some first timid attempts were performed not long ago, by creating a couple of battlefield scenery pieces (a bailed out command Panzer and a downed I-15 fighter), that have proven to be successful enough to encourage us to try and expand the range with a new series of elements --either large buildings or simple widgets.

So that, taking advantage of the mutual trust arisen after our retailing partnership with Surus Creations (by which we became a vendor of their Belchite 1:100 scale SCW scenery), we alongside met a further agreement with them for a similar 1:72 scale range to be made in exclusive for Minairons, under our own make.

Little afterwards, work started on a first project --under some kind of deliberate news blackout, admittedly: a modernist style Wine Cellar, inspired on the numerous cooperative farming facilities built between 1914 and 1925 by the Commonwealth of Catalonia, a semi-autonomous government institution of these years.

Despite work on masters is well advanced now, so that some preliminary pictures might be already shown, we've preferred to let the whole prototype be finished before sharing with you. Pictures will follow in few days, I promise. meanwhile, I've thought you would like to take a glance on the thing plans, so as to get a first taste on the thing: 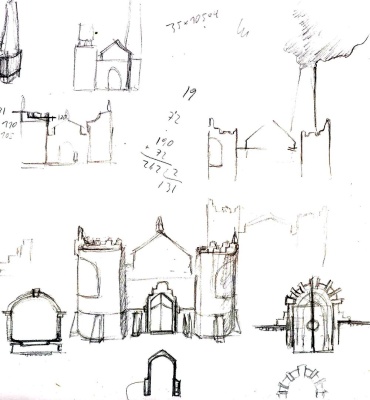 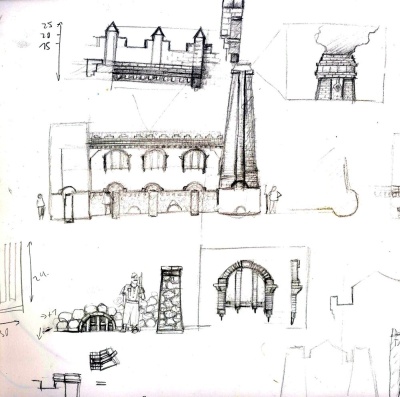 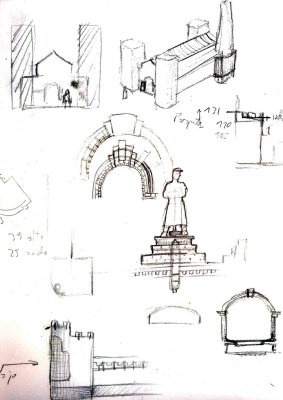 Some kit elements (such as chimney, for instance) have been devised as optional, depending on whether the user plans to build an industrial factory in an urban background, or as an oil or wine cellar for his countryside settings instead.

As said above, work on this superb building masters is well advanced now, so that we'll be able to show you pictures of it in not too many days' time.

Posted by Soldadets at 7:00 PM No comments: 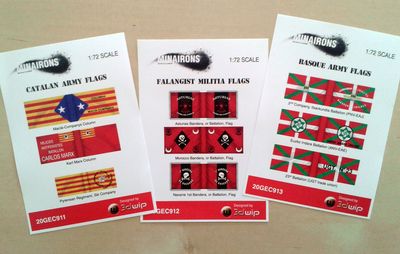 Once again, our range of 1:72 scale flags for 20mm Spanish Civil War gaming has just grown with three new sets: Catalan Army, Falangist militias and Basque Army. As customary, these A7 sized sheets contain three historical flag designs each, all slightly textured so as to simulate waving shadows.

After this addition, the above mentioned range now ascends to 13 different flag sheets, that can be found in this page. Such range will keep growing in the next months at a good pace; as a matter of fact, we are now preparing three new sets in this scale: Foreign Legion (already released for 15mm time ago), XI International Brigade and XIII International Brigade.

Posted by Soldadets at 5:06 PM No comments: